Washington Commanders star wide receiver Terry McLaurin has been one of may top-end players at his position angling for a new contract this summer.

Following consecutive 1,000-yard seasons, the former third-round pick from Ohio State is seemingly underpaid in the grand scheme of things. It’s led to McLaurin remaining away from voluntary off-season activities.

It now looks like the 26-year-old pass-catcher is willing to catch a pretty significant fine by holding out of mandatory minicamp this coming week.

It’s up to the Commanders whether they’d fine McLaurin for missing camp. Said fine would come in at $95,877. In reality, fining the wide receiver could create more of an issue between the two sides. 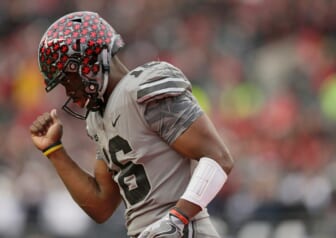 McLaurin is currently playing under a four-year, $3.85 million contract he signed with Washington shortly after being selected No. 76 overall in the 2019 NFL Draft. Obviously, he’s far outpaced said contract.

Washington has been said to be budgeting for a lucrative contract. However, it appears things are not imminent on that front.

Fellow young wide receiver A.J. Brown inked a four-year, $100 million contract with the Philadelphia Eagles after being dealt from the Tennessee Titans during the 2022 NFL Draft in April. That’s pretty much the ballpark of what McLaurin would earn on a new deal with the Commanders.