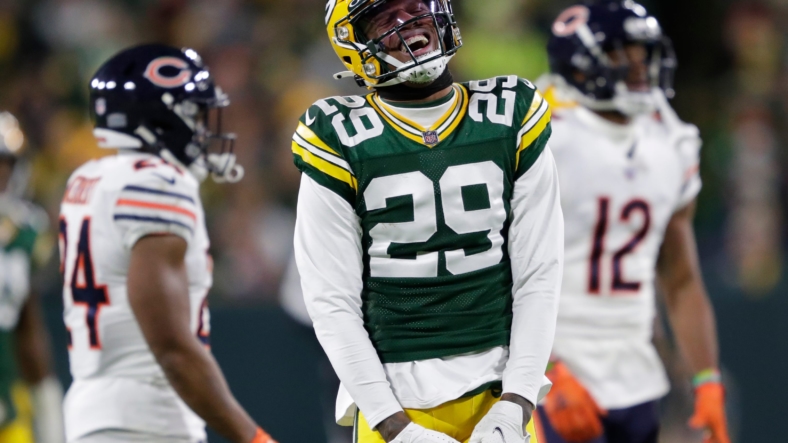 The Green Bay Packers may have one of the top NFL defenses in 2022. One of the best parts of this unit is its cornerbacks. Jaire Alexander is an All-Pro defender fresh off a contract extension. Eric Stokes had a very solid rookie season too. However, there was another cornerback who came to Green Bay last season and created one of the most unlikely sparks in the game. His name is Rasul Douglas, and his story from last season is unbelievable.

Related: Looking at Aaron Rodgers’ success against the NFC North under the microscope

After spending the first three seasons of his career with the Philadelphia Eagles (2017-2019), Douglas moved on to the Carolina Panthers in 2020. No one could have known at the time, but his 2021 journey would go on to be legendary in several aspects. The former West Virginia Mountaineer started off the season on three different practice squads. It almost felt like his career was coming to an end after spending time with the Raiders, Texans, and Cardinals.

However, Douglas got a new opportunity to show what he can do when Green Bay came calling. After Alexander and then-Packers cornerback Kevin King went down with injuries, the team had no choice but to find another cornerback on short notice. They then signed Douglas to the practice squad in early October to give him a chance.

Just weeks later, Douglas would go on to make his Green Bay debut on October 17th against the division-rival Chicago Bears. Little did Packers fans know that the former Super Bowl winner was about to go on a blazing run for the rest of the season. The shutdown corner would go on to lead the team in interceptions with five, including two pick-6s while playing in just 12 games for the Packers.

Keep in mind that he had to learn everything on the fly, from the scheme to his teammates, and of course, find a place to live. None of that seemed to bother Douglas in his new digs.

The highlight of his season came against his former team in the Arizona Cardinals, on a Thursday night in primetime in late October. When all hope was seemingly lost, Douglas intercepted quarterback Kyler Murray to win the game for the Packers. It was almost like fans were watching a reincarnation of Charles Woodson or Tramon Williams in their heyday. Thanks to his outstanding effort, Douglas helped the Green Bay defense finish in the top 10 in total defense for the second consecutive season and top 10 in takeaways.

After his impressive and unreal run in 2021, the New Jersey native earned a new three-year deal to stay on Lombardi Ave for at least a few more runs. Looking ahead at the 2022 season, the Pro Bowl alternate is now part of a three-headed monster on the boundary for the Packers’ defense, where he’s found a home for good.

Alexander, a 2020 second-team All-Pro, is one of the best lockdown cornerbacks in the game. Eric Stokes finished first among rookies last season in passes defended with 14. Now, Douglas is added to the mix, only he’s already familiar with his surroundings as he enters his first full season with the team.

If Douglas plays anything close to the way he played last season, either in the slot or on the outside, opposing receivers are going to have a lot of bad games when facing the Packers. His footwork, vision, and his ability to break on the ball make him the total package for Green Bay.

This Packers secondary is the backbone of this unit, and for good reason. Rasul Douglas is a classic example of why Joe Barry’s defense has proven to be one of the best in the business. He’ll have a great opportunity to continue his run in Week 1 against a talented Vikings receiving core headed by All-Pro Justin Jefferson and Pro Bowler Adam Thielen.