Carolina Panthers owner David Tepper is playing negotiating hardball with York County, South Carolina officials, and it is now leading to a very public blowback from some elected representatives.

The Panthers are supposed to be in the process of constructing a new practice facility and team headquarters in the city of Rock Hill. The project will cost several hundred million dollars to finish, and the city agreed to give the team $225 million in bonds for the 240-acre development. Unfortunately, the city has not reportedly delivered on those bonds, and Tepper has brought a halt to construction. The team owner claims more than $170 million has already been put into the project.

Late in March, Rock Hill officials came up with alternatives to deliver on their promise and devised a new plan that would see the Carolina Panthers receive tax incentives “for four decades.”Yet, it seems that this new strategy was not to Tepper’s liking, and construction has never restarted. It has now gotten to the point where one Rock Hill councilman told the Charlotte Business Journal they believe the project has been permanently abandoned.

The apparent impasse between the Panthers and the city has now led one state official to callout Tepper for not delivering on the promises he made when he purchased the team for $2.275 billion in 2018.

“The bottom line is that our community deserves answers,” Sate Senator Wes Climer told the Charlotte Business Journal on Tuesday. “The city, the county, the state, and the Panthers worked together constructively for a considerable period of time at great effort to bring to Rock Hill a world-class sports entertainment center. David Tepper came to Rock Hill promising us [Dallas Cowboys owner] Jerry Jones and ever since then he’s given us [Washington Commanders] Dan Snyder.”

Related: Check out our 2022 NFL mock draft for the Carolina Panthers

This situation could certainly lead to legal action from the city and is not a good look for the league. The NFL may need to intervene in the hopes of avoiding more negative public relations after sexual assault allegations against the Washington Commanders led to a Congressional examination of the league. However, considering that he is one of the richest owners in the sport, it is hard to see the real merit in Tepper’s strategy in Rock Hill.

These issues won’t be helpful when it comes time to get funding for a new Panthers stadium in the future. That is unless Tepper’s long-term goal is to wear out his welcome and take the franchise elsewhere. 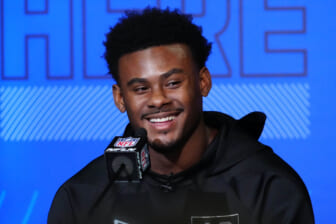