This NFL offseason has been the most entertaining and shocking offseasons of all time. That could include Saquon Barkley being moved by the New York Giants.

The Giants have had a lackluster offseason. Due to limited cap space, they’ve had to release several veteran players and had to settle for making subtle free agent signings.

However, with NFL Draft just a month away, it seems that they’re on the verge of making a huge transaction. That includes trading Saquon Barkley.

Following his phenomenal season in 2018 when he was named NFL Offensive Rookie of the Year, Barkley’s career has been marred by injuries. Now that he’s in the final year of his contract, there have been numerous reports that general manager Joe Schoen is looking to trade the 25-year-old running back, along with his $7.2 million cap number for next season.

When you trade a player with the skillset of Barkley you seldom get equal value in return. In fact, New York may have to settle for getting a mid or late-round pick in exchange for him.

But it still makes sense for the Giants to trade Barkley prior to the draft. Here are three reasons why.

As we mentioned earlier, Barkley is in the final year of his contract and unless he breaks the all-time single-season rushing record or is an MVP candidate, there’s no way New York will offer him a new contract.

Barkley and his agent will be seeking to become one of the highest-paid backs in the NFL, and even if he were to stay healthy and productive, the Giants aren’t in position to be able to afford him.

It’s possible the Giants could let Saquon Barkley play out the season and then acquire a compensatory pick when he leaves via free agency. But it would be in the best interest of the Giants to trade Barkley now and see if they can acquire a player or players that will be in the team’s plans for years to come.

New York Giants have their eyes on James Cook

After his impressive showing at the NFL Scouting Combine and Georgia’s Pro Day, it’s been reported that the Giants love Georgia running back James Cook. These reports surfaced after Schoen was in attendance at the Georgia Pro Day on March 16.

Cook is the younger brother of Minnesota Vikings running back Dalvin Cook, and just like his older brother, he is a versatile running back that can fit in any offensive system.

In his four seasons with the Georgia Bulldogs, he gained 1,503 yards on the ground with 14 rushing touchdowns and caught 67 passes for 730 yards and nine receiving touchdowns. 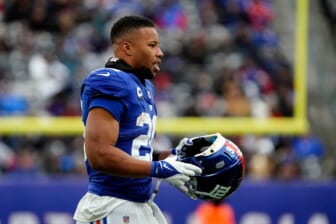 Also Read:
Trade markets for James Bradberry and Saquon Barkley not what Giants hoped for

In Georgia’s 34-11 victory over Michigan in the National Semifinal game, Cook had a game-high 112 receiving yards on four receptions and a touchdown. He also carried the ball six times for 32 yards.

It’s projected that Cook will be a mid-round pick in the upcoming draft which is an ideal position to take a running back in today’s NFL. Considering New York has two third-round picks (67th and 81st) and the 108th pick in Round 4, Schoen will have opportunities to draft Cook.

Cook may not make an immediate impact the way Saquon Barkley did, but he has a promising NFL future.

Brian Daboll is accustomed to running back by committee

When healthy Barkley has been the workhorse in the Giants’ offensive game plan. But in his four seasons as the Bills’ offensive coordinator, head coach Brian Daboll never had a running back carry the ball more than 188 times in a season.

Some of this can be attributed to quarterback Josh Allen’s running ability and the fact that he never had a back as dynamic as Barkley. But as you can see from his past, Daboll has never relied heavily on one ball carrier.

Last week, the Giants signed veteran running back Matt Breida who was with Daboll and Schoen last year in Buffalo. The combination of Breida and possibly Cook or another running back the Giants draft could best suit Daboll’s offense as opposed to having a workhorse like Saquon Barkley.