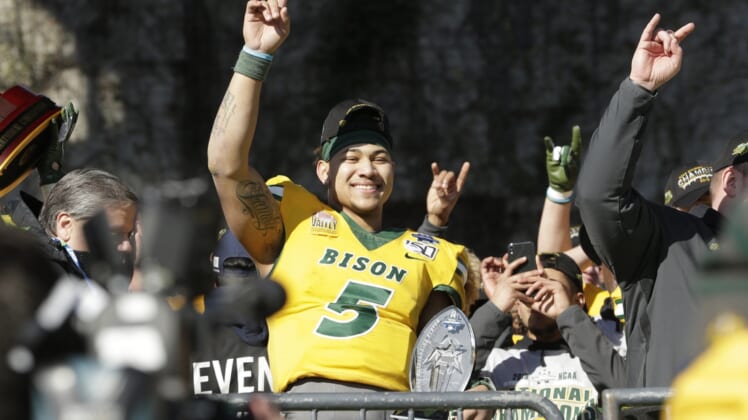 Smokescreen season at its finest. The San Francisco 49ers traded up from the 12th overall pick to No. 3 in the 2021 NFL Draft a month ago. Since then, there’s been reckless speculation about who the 49ers are going to add with that selection.

This all changed once the 49ers were on the clock Thursday night in Cleveland. San Francisco selected former North Dakota State standout quarterback Trey Lance with the third selection.

It’s an interesting thing to look at. NFL insiders who are usually on top of their game when it comes to the annual NFL Draft had absolutely no idea who the 49ers were taking. It was one of the backdrops to head coach Kyle Shanahan and general manager John Lynch taking their jobs in San Francisco in the first place — the need to stop the leaks that defined the latter years of the Jim Harbaugh era.

We got some more information on this after the San Francisco 49ers made their pick. According to ESPN’s Adam Schefter, not a single member of the 49ers’ coaching staff outside of Kyle Shanahan knew who they were selecting until the card was turned in and Roger Goodell announced the selection.

This simply isn’t something we see every day. It also had those around the league on pins and needles. That was magnified Thursday leading up to the draft with rumors suggesting that the 49ers were making a late play for reigning NFL MVP Aaron Rodgers. Now, the question becomes what the 49ers are going to do at quarterback during the 2021 season.

Leading up to the draft, pretty much every insider had the 49ers going with Alabama quarterback Mac Jones. The idea would have been for a more pro-ready Jones to potentially start as a rookie with San Francisco trading away Jimmy Garoppolo.

Despite boasting the highest ceiling in the entire 2021 NFL Draft, Lance is not pro-ready. He played against lesser competition in college and has not thrown a pass in a regular season game since 2019 after the 2020 FCS season was canceled due to the COVID-19 pandemic.

There’s now a good chance that the San Francisco 49ers retain Garoppolo to start this coming season with Lance taking to the field in some packages.