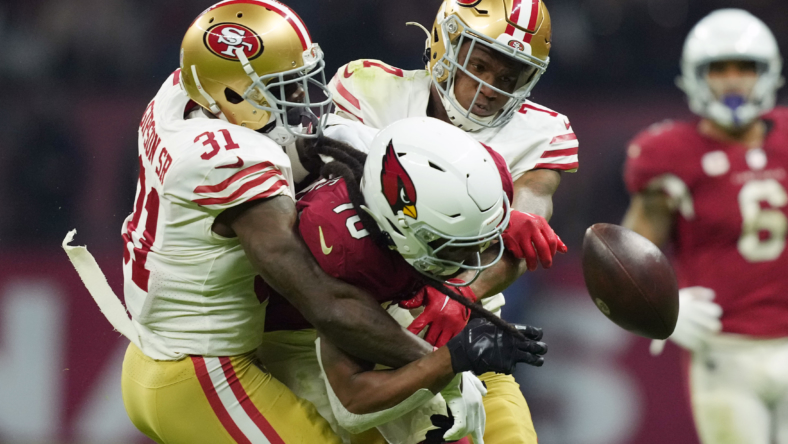 Charvarius Ward and the San Francisco 49ers had their way with DeAndre Hopkins’ Arizona Cardinals squad in Mexico Sunday Monday night, winning by the score of 38-10.

Hopkins was able to continue his brilliant play since returning from a six-game PED suspension, recording nine catches for 91 yards on 12 targets. A lot of that came with a likely Pro Bowler in Ward covering him.

Throughout the game, the two could be seen jawing at one another. For Hopkins, it became clear that frustration was taking over as his Cardinals were on the verge of being blown out.

Following the game, Ward spoke with broadcasters Greg Papa and Tim Ryan of KNBR during a post-game show. In said interview, the first-year 49ers player absolutely laid in to Hopkins.

“D Hop, he think he a tough guy. He think he still one of the best receivers in the league and he really not. He was trying to talk noise and talk hard all game. We not scared of him. He thought we was scared of him. He tried to intimidate us, but forget him, we did our thing. We went out there and got a dub and we did our job. He was just yip-yapping all game, but we don’t care about that. We just wanted to win.”

Ward went on to say, “I don’t respect his game. That’s steroid boy.”

Whew. Why don’t you tell us how you really feel, Mr. Ward?

To be fair to Hopkins, he had not been linked to performance enhancing drugs (PEDs) throughout his career before a surprise positive this past offseason cost him six games.

“In my 10-year career, I have never tested positive for using performance-enhancing drugs. To learn that my November test came back with trace elements of a banned substance, I was confused and shocked,” DeAndre Hopkins said after suspension was annunced. “I am very mindful of what I put in my body and have always taken a holistic approach, so I am working with my team to investigate how this could’ve happened. But even as careful as I have been, clearly I wasn’t careful enough.”

San Francisco finds itself at 6-4 on the season and in the midst of a three-game winning streak. The team has outscored its opponents by 51 points during this span. Meanwhile, the Cardinals are a mere 4-7 on the campaign.

One might conclude that this is not necessarily a rivalry in 2022. That would be utterly foolish. In-division games are filled with emotions. If both Ward and Hopkins are able to go Week 18 as the 49ers host Arizona, it wouldn’t be a surprise if they butted heads.

As for Ward, he’s been brilliant in his first season with San Francisco. The veteran cornerback has yielded a 51% completion mark and 60.2 QB rating when targeted. He’s now doing his talking off the field, too.