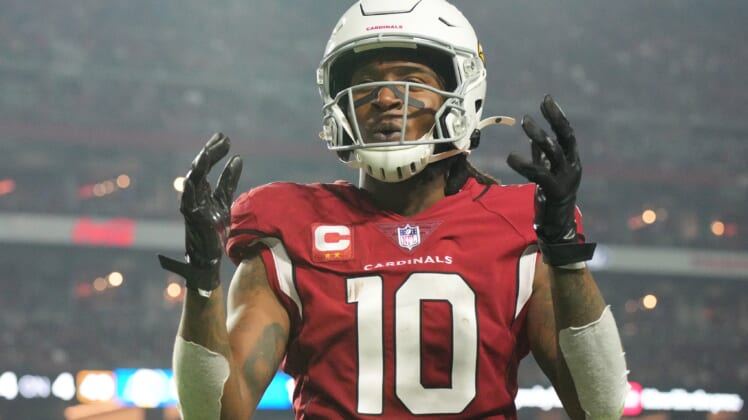 In a public apology to fans, his teammates, and the Arizona Cardinals franchise, DeAndre Hopkins admitted confusion and an intent to “get to the bottom of this” after being hit with a six-game suspension by the NFL.

On Monday, football fans and Cardinals supporters were stunned when ESPN NFL insider Adam Schefter reported that the five-time Pro Bowler would miss a third of the upcoming NFL season after violating the league’s Performance Enhancing Drug (PED) policy.

The suspension is a notable blow to the team’s offense in 2022. Despite playing in only 10 games last season, the Arizona Cardinals wide receiver still pulled in 42 passes for 572 yards and an impressive eight touchdowns. Luckily for the organization, they acquired star pass-catcher, Marquise Brown, from the Baltimore Ravens during the 2022 NFL Draft. That move now looks like one that had not just want behind it, but a necessity after Hopkins’ suspension.

DeAndre Hopkins: ‘In my career, I have never tested positive for using performance-enhancing drugs’

In his first public statement since the six-game ban, the three-time All-Pro did not deny that a banned substance was found in his body, however, he expressed confusion by the positive test and planned to investigate the cause.

“In my 10-year career, I have never tested positive for using performance-enhancing drugs. To learn that my November test came back with trace elements of a banned substance, I was confused and shocked,” Hopkins wrote on social media. “I am very mindful of what I put in my body and have always taken a holistic approach, so I am working with my team to investigate how this could’ve happened.

“But even as careful as I have been, clearly I wasn’t careful enough,” he added. “For that, I apologize to Cardinals fans, my teammates, and the entire Cardinals organization. I never want to let my team down. I fully intend to get to the bottom of this. As soon as I have more information, I will share it.”

All indications are that Hopkins will be unable to appeal his suspension. The 2022 NFL season begins on Thursday, Sept. 9.