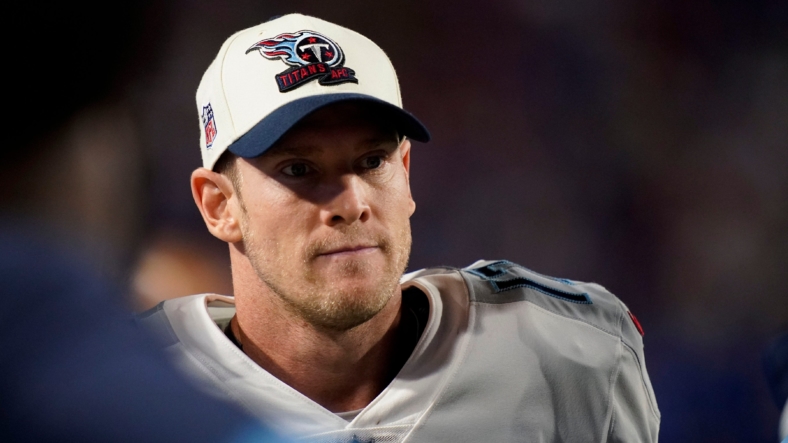 Whether it was the Tennessee Titans waiving the white flag or something else, quarterback Ryan Tannehill didn’t even finish up three quarters against the Buffalo Bills on Monday night.

Tannehill was benched by Mike Vrabel and Co. after throwing a pick-six into the hands of Buffalo Bills linebacker Matt Milano with Tennessee down 34-7 in the third quarter.

You can’t make a mistake like that as a veteran quarterback. You have to see the linebacker dropping into covrage. It’s that simple. It’s also just a continuation of major struggles on the part of Tannehill since he put up a solid first two seasons as a member of the Titans in 2019 and 2020. It also has this team looking very much like a pretender as it falls to 0-2 on the season.

Again, this could just be a case study of Tennessee throwing in the white flag. It fell down 41-7 late in the third quarter after that ugly pick-six. Then again, Tannehill’s struggles have placed him under a microscope dating back to the Titans’ AFC Wild Card Playoff loss to the Cincinnati Bengals last January.

“Any time you lose it is a gut-punch. We put a lot into it and got the start that we wanted to. Give (the Giants) a lot of credit – we went flat and then we weren’t able to get anything going in the second half.”

While Vrabel wasn’t necessarily talking about Tannehill specifically, we can read between the lines here. Tennessee’s offense struggled in the second half of its season-opening loss to the pedestrian New York Giants. Those struggles continued over to Monday night against a superior Bills squad.

We’re not saying that it’s time for the Titans to bench Ryan Tannehill in favor of rookie third-round pick Malik Willis. But a few more performances from the quarterback like what we saw Monday night in Western New York could very well lead to that end result.