Earlier in the week, a strange rumor suggested longtime Seattle Seahawks quarterback Russell Wilson had a list of three teams he would strongly consider dropping his no-trade clause for. Those three teams were the Denver Broncos, New Orleans Saints, and the New York Giants, respectively.

Now, to no one’s surprise, Russ is refuting any such reports, claiming he never said any such thing and called the whole ordeal “a non-story“.

Wilson went on to mention how he hopes to finish his career in Seattle.

“That’s not in my head right now at all,” Wilson said. “I didn’t say that. I’m focused on what we’re doing here. Obviously I love Seattle. This is a place I’ve loved every day, every moment.”

When asked if he expects to play out the remaining two years on his contract, Russ continued the theme for the day, staying hopeful.

“That’s my hope,” Wilson said. “My hope’s not just to fulfill it. Hopefully I can play here 20 years and my career. WIll that happen? I don’t know. That’s my prayer, that’s my hope. That stuff’s in the future, that stuff’s down the road. I think my mission, my focus is only on right now.”

Again, what is he expected to say? Yeah, you got me, I was hoping no one would ask? Russ knows better. He was fully prepared to shoot down any rumors.

‘Hawks fans hoping to keep Wilson shouldn’t feel any relief from the QB’s comments. The truth is, the 4-8 Seahawks aren’t going anywhere this season, despite their latest efforts.

Once the regular season ends and the offseason gets underway, expect the Russell Wilson trade rumors to pick right up where they left off. Maybe this time after all the smoke from the past few years, there will be some fire. 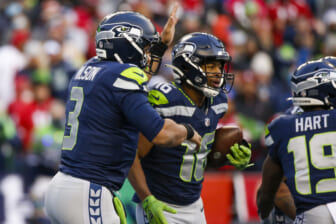