Just two months after Richard Sherman was arrested in a domestic violence case, the former Pro Bowl cornerback remains interested in a return to the NFL and there are plenty of suitors interested.

Sherman was one of the top NFL free agents entering the offseason, but many teams prioritized other options due to the reduced NFL salary cap. The veteran defensive back planned to sign after the 2021 NFL Draft and was seeking a specific situation for his next home.

But everything changed for Sherman in July. He is facing five misdemeanor charges after an alarming incident that saw him crash his SUV in a construction zone, attempt to force his way into a family member’s home and drive under the influence.

As his legal situation plays out, NFL teams are reportedly keeping tabs on the situation. According to NFL Network’s Tom Pelissero, the Tampa Bay Buccaneers reached out to Sherman this past week and the San Francisco 49ers remain in contact with him. 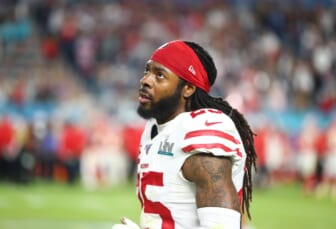 Both teams are certainly in need at the position. The Buccaneers lost top corner Sean Murphy-Bunting (dislocated elbow) indefinitely and San Francisco’s No. 1 cornerback Jason Verrett tore his ACL in the season opener.

Sherman has always been open to re-signing with the 49ers, even after the departure of defensive coordinator Robert Saleh.

But there will be plenty of competition to sign the 33-year-old who was named second-team All-Pro in 2019. Both the Seattle Seahawks and New Orleans Saints expressed interest in Sherman during the offseason, but an agreement couldn’t be reached due to his asking price.

Sherman, who is currently at the weight he played at with the Seahawks (195 lbs.) is currently receiving therapy and working through the issues that caused the incident in July. Once everything is resolved, it shouldn’t be long before he returns to the NFL with a Super Bowl contender.