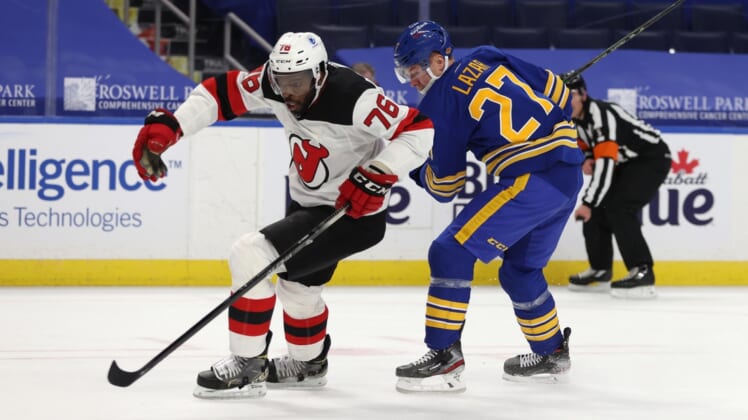 Linus Ullmark made 31 saves and was perfect in the shootout as the host Buffalo Sabres extended their point streak to five games with a 4-3 win over the New Jersey Devils on Saturday.

Captain Jack Eichel scored the lone goal of the shootout and Taylor Hall recorded two assists against his former team. Buffalo improved to 3-0-2 since losing three of four to open the season.

Ullmark was solid in his fifth straight start for the Sabres, who also got goals from Eric Staal, Tobias Rieder and Victor Olofsson.

Ty Smith, Andreas Johnsson and Janne Kuokkanen each scored for the Devils, who have dropped three in a row (0-2-1).

New Jersey seized a 2-1 lead at 1:37 of the third period on a rocket from Johnsson. Buffalo, though, answered 41 seconds later as Rieder scored from the left-circle dot.

The Sabres went up 3-2 with 9:04 left in regulation via Olofsson’s wrister on the power-play. New Jersey, however, tied the contest with 5:19 to go when Kuokkanen banked the puck off the back of Ullmark and into the net.

Neither team found the net through the opening 20 minutes. New Jersey had the best chance with a 5-on-3 situation, but the Sabres’ defense and Ullmark clamped down to the kill the penalty.

It was Buffalo that opened the scoring on Staal’s third goal of the season with just under 11 minutes to go in the second period. Finishing off some textbook passing with Brandon Montour and Hall, Staal sent a laser from the slot past Scott Wedgewood (28 saves).

New Jersey finally cashed in on its fourth of five power-play chances through Smith. With 1:25 left in the second, Smith ripped a shot from the center point and by Ullmark to forge a tie at 1.

The Sabres played without Sam Reinhart, who is day-to-day with an upper-body injury. Meanwhile, the Devils were minus Travis Zajac, who is in COVID-19 protocol.

These teams will play again Sunday at Buffalo.