San Francisco 49ers running back Raheem Mostert went down in the first quarter of Sunday’s season-opening win against the Detroit Lions with a knee injury.

At least initially, it seems as if the electric back would miss just a couple months of action with chipped knee cartilage.

Mostert took to social media on Tuesday, indicating that he’s going to undergo season-ending surgery with the expectation of being back at 100% for the 2022 campaign.

For Raheem Mostert and the 49ers, this is just brutal news. One of the most-electric backs in the entire NFL, Mostert continues to deal with injuries on a near never-ending loop. Remember, he missed eight games last season due to numerous injuries.

When on the field, Mostert has proven to be a game-changer. Since the start of the 2019 season, he’s averaging a resounding 6.0 yards per touch while scoring 13 touchdowns. That included an historical performance against the Green Bay Packers in the 2019 NFC Championship Game.

Impact of Raheem Mostert injury on the San Francisco 49ers

With Mostert having exited early in Week 1, rookie sixth-round pick Elijah Mitchell from Louisiana picked up the slack. The youngster gained 104 yards on 19 attempts while scoring a touchdown.

Mitchell was surprisingly active over rookie third-round pick Trey Sermon, who didn’t dress for the game despite being 100% healthy. An undrafted free agent from Baylor, Jamycal Hasty also scored a touchdown in the 41-33 win.

The Mostert injury also comes with Jeff Wilson currently on injured reserve with no timetable for return. Hence, the signing of Kerryon Johnson to the practice squad.

The former second-round pick of the Detroit Lions jumped on to the scene as a rookie back in 2018, recording 854 total yards at a clip of 5.7 yards per touch. However, he was waived by the team this past summer after struggling to the tune of 3.5 yards per rush over the past two seasons. 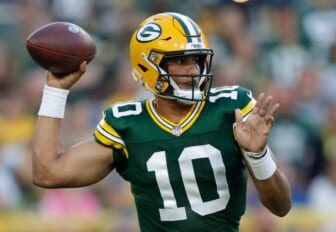