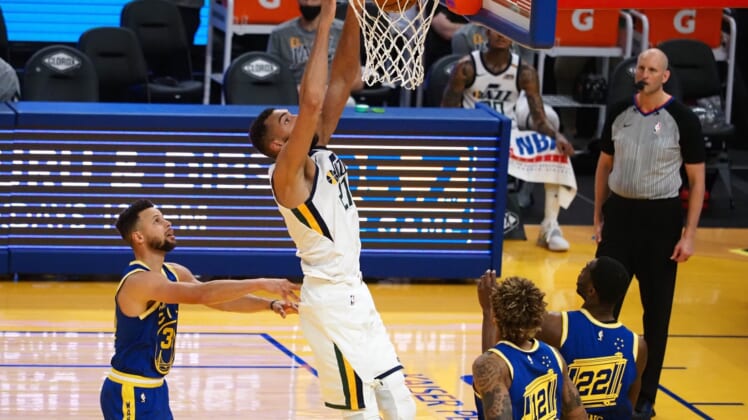 The Utah Jazz enter the second leg of a five-game road swing Tuesday night against the Boston Celtics. Back-to-back lackluster outings for the Jazz — the team with the NBA’s best record — have raised red flags going into Boston.

Utah fell to Golden State 131-119 Sunday in a game in which the Jazz trailed most of the game. Utah lacked defensive intensity and turned the ball over in bunches. This led to the Warriors dominating the game, even as the Jazz’s Rudy Gobert matched a franchise record by collecting 28 rebounds to go along with 24 points and four blocks.

“It’s hard when you turn the ball over,” teammate Donovan Mitchell said. “We had 14 (against Golden State), but some of them are pivotal. Some of the big moments and certain stretches they get compounded. When they’re hitting tough shots or just hitting shots and then you get a turnover, that makes it feel like it’s worse than it is, and then it affects different things.”

Turnovers have been a problem for the Jazz coming out of the NBA All-Star break. Utah had 17 against Houston on Friday. Utah eventually won 114-99 but saw a large lead cut to four in the fourth quarter because of repeated miscues.

While the Jazz got away with a lackadaisical effort, the same wasn’t true against Golden State on Sunday. Utah’s struggles with turnovers were compounded by defensive lapses that led to the Jazz trailing by as many as 15 points in the second half.

“Our execution was such that we didn’t take enough things away,” Jazz coach Quin Snyder said. “They obviously capitalized on that, but we’ve got to be more focused on what we want to do from an execution standpoint and make it happen out on the court.”

Boston could present major challenges for Utah if the Jazz aren’t executing well.

The Celtics drilled Houston 134-107 Sunday behind a potent offense. Boston shot 55.4 percent from the field and rested its starters for most of the fourth quarter against a Rockets team that has lost 16 consecutive games. The Celtics have won five of six since struggling in February.

Robert Williams III played a big role in the latest win. He became just the 10th player in NBA history to get at least 16 points and 13 rebounds while playing fewer than 20 minutes. Williams had 16 points on 7-of-7 shooting from the field, 13 rebounds and three blocks against the Rockets.

Over the past 10 games, he has averaged 9.1 points while shooting 71.4 percent from the field. He also is averaging 7.6 rebounds and a team-high 2.7 blocks. All while averaging only 18.6 minutes per game.

The Celtics have been cautious with his minutes after Williams missed significant time with a hip injury last season. But Williams’ role will keep growing with how efficient and effective he has become on both ends of the court.

“We can make it so that he can play more, and more, and more as the season goes on,” Celtics coach Brad Stevens said. “Again, the density of the games and his history, especially last year, we’re just being conservative. But he’s getting a lot better. You can see that. And he’s able to play a little bit longer stints than he has in the past because he plays really hard when he’s out there.”

Utah won the first meeting with Boston this season, 122-108 on Feb. 9, behind 36 points and nine assists from Mitchell.