Evaluating the potential playoff matchups for the New York Yankees 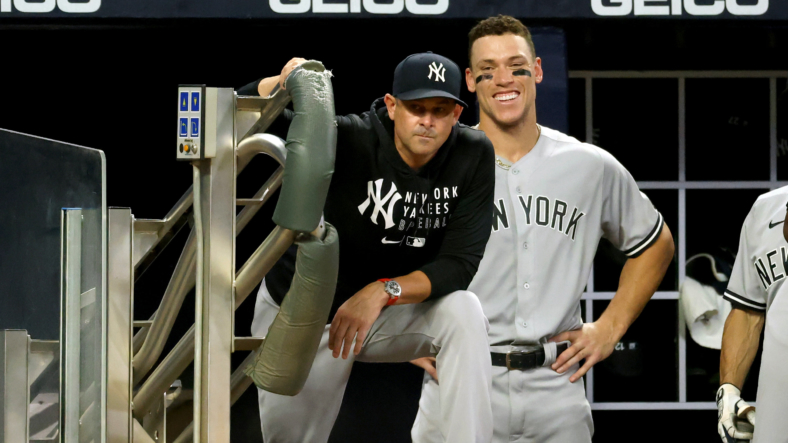 As the conventional playoff bracket forms into shape, the New York Yankees must win just 13 games to clinch a playoff berth. They have a 5.5-game advantage over the Blue Jays, with the Rays just half a game removed from Toronto. New York has navigated through uninvited repercussions and maintained a substantial lead in the AL East for the majority of 2022.

In what remains of the season, the Bombers don’t have a relatively rigorous schedule. After their ventures in Milwaukee, they head home for a six-game homestand which welcomes two teams below .500. The only significant stretch which may reconfigure the current standings would be in Toronto for three games. Aside from the Jays, there aren’t too many roadblocks that would hamper the Yankees’ hunt for the division crown.

It has been a generational tradition for Yankee fans to boast their 27 rings, albeit they haven’t been too reputable in the postseason. When the power rankings are compartmentalized at the outset of each season, the Yankees are always the subject of World Series talks. Regardless of what people may gauge, it seems that New York is ousted from the postseason almost every season. They were immediately disposed of by the Red Sox in 2021 after Gerrit Cole couldn’t channel his Cy Young form in the Wild Card. Additionally, the 2019 postseason is a controversial topic in part due to the unjustified violations of the Houston Astros.

As the playoff picture begins to forge, it’s time to take a look at the possible opponents for the Yanks. Tentatively, New York is predicted to obtain a pass on the AL Wild Card, which would prompt an ALDS battle.

If the bracket remains in cardinal order, the Yankees will front the winner of Cleveland and Tampa Bay. The Wild Card race is separated by just half a game with three corresponding teams. The Mariners currently possess the four seed while the Blue Jays and Mariners grapple for the remaining spots. If the Orioles were to play spoiler, which remains to be seen, the Yankees could objectively host the ALDS against Baltimore.

New York has fared considerably well against Cleveland, as they took five of six in the season series. As opposed to Tampa, which the Yanks can tolerate but are aware of the damage that can be done. Although in games conducted at Yankee Stadium, the Yanks are 7-2 against the AL East foes.

When measuring the two lineups, the Guardians are exponentially greater in terms of perseverance and roster depth. The Rays have been inclined to injuries for the entirety of 2022, which appeals to their lack of depth. On the flip side, Cleveland has been immune to injuries which is a testament to their .251 collective batting average.

A 28th World Series for New York Yankees is in reach

Beyond the ALDS, it’s difficult to gauge exactly where the Yankees will fare. If the Yankees were to proceed to the ALCS, they will likely encounter their dreaded rivals, the Houston Astros. There will be tension that is bound to transpire throughout the series, but above all else, the Yanks are 2-5 in the season series.

The World Series is obviously the long-term objective, but it won’t be simple to attain. Despite the American League, its counterpart, the National League is crammed with organizations such as the Atlanta Braves, New York Mets, and Los Angeles Dodgers, who are all superior in the win column. Nonetheless, this year’s compressed postseason schedule will be excruciating, and the Yankees are poised to pursue their 28th title.