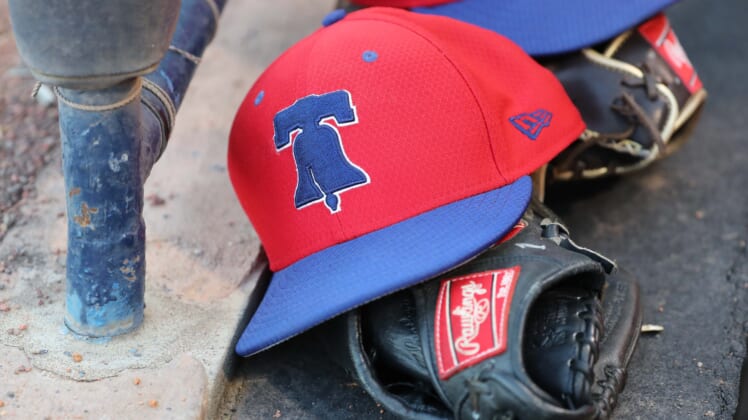 The Philadelphia Phillies wasted little time selecting right-handed pitcher Andrew Painter when they were on the clock in the 2021 MLB Draft. Just as quickly as Philadelphia drafted the 6-foot-7 righty, he’s already proving why he is one of their best prospects.

A native of Pompano Beach, Florida, Painter was coveted for years. A gold medal winner with the Under-15 USA Baseball National Team in 2018, Painter committed to the University of Florida early during his time at Calvary Christian High School.

After dominating high school competition in Florida and being named to the Under Armor All-America Baseball Game, Painter became eligible for the 2021 MLB Draft. He was rated as the No. 18 overall prospect by MLB Pipeline, third among high school pitchers.

MLB teams are typically cautious of drafting arms out of high school. A poor track record in recent years, including the likes of Tyler Kolek and Brady Aiken, shows the risks of drafting a young pitcher before he’s proven himself at the collegiate level. However, the Phillies haven’t shied away from taking a gamble.

A year after Philadelphia drafted high school righty Mick Abel with the 15th pick in the 2020 MLB Draft, the club followed it up by selecting Painter with the 13th pick in 2001.

The Phillies were already high on Painter, confident in his makeup and stuff. With manager Joe Girardi also having a personal connection, his son having been former high school teammates with Painter, the decision became easy.

“He’s a large human being, you notice that immediately. Then you start digging into the baseball attributes. The delivery is an excellent starting point. The arm action works really well. And he just has really good stuff. The very first time we saw him last summer, he was up to 97 mph. He has a curveball and a slider that both project to plus and a changeup that he has a really good feel for, for an 18-year-old. The icing on the cake was it was a guy that at that age had a feel for pitching and the ability to throw strikes. It was a complete package for us from Day 1.”

Painter made his professional debut late in the 2021 season at the Rookie-level Florida Complex League, striking out 12 batters with only four hits allowed across six innings. After a full offseason to work with coaches, the 19-year-old is off to an unbelievable start in the 2022 season.

The Phillies assigned Painter to the Clearwater Threshers, their Single-A affiliate, to open the 2022 minor-league season. He overwhelmed hitters right out of the gate, striking out 9-of-13 batters faced with only one walk and three hits allowed on April 9.

Against the New York Mets’ Single-A affiliate on April 16, Painter did even more damage. He recorded seven strikeouts across four innings and didn’t surrender a single hit to the 14 batters faced. Already off to a phenomenal start to his 2022 campaign, Painter took things to another level on April 24.

Pitching against the New York Yankees A-ball lineup, Painter struck out 14 hitters with only one base runner allowed across five shutout innings. The box score itself was impressive, but the advanced metrics on his strike-to-ball ratio, velocity and whiffs really stand out.

Heading into 2022, MLB.com and FanGraphs both ranked Painter behind Abel and Bryston Stott among the Phillies top prospects. With Stott set to lose his prospect eligibility this season and Abel working his way back from shoulder tendinitis in 2021, there’s a possibility Painter could be Philadelphia’s No. 1 prospect by the end of the 2022 season. He’ll also likely rank as a top-50 prospect in MLB by July.

Painter’s size already makes him a problem for opposing hitters, helping his release point. The frame also enabled him to add muscle, improving his fastball velocity without putting too much stress on his body. It’s on full display so far with the electric fastball and he’s mixing in the slider with a changeup.

What helps separate him from pitchers around his age is Painter’s feel for pitching, knowing when to mix his pitches and when to throw with max effort on the fastball. Just as important, his command is quickly becoming a ‘plus’ took that will make his four-pitch mix even better.

Initial projections believe Andrew Painter’s MLB debut wouldn’t come until 2025, but he’s progressing more rapidly than expected. While there will be bumps along the way, he’s in the right organization for development and his improvements thus far are noteworthy. It shouldn’t surprise anyone if he joins the Phillies’ rotation by 2024.