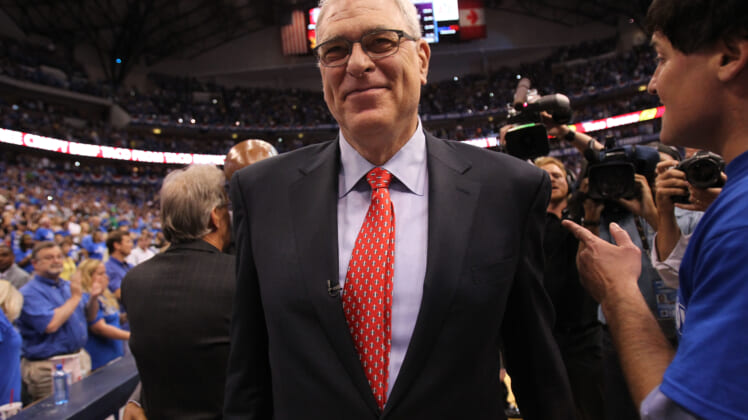 You’ve likely heard, but the Los Angeles Lakers are in search of their fourth coach in the past eight years after agreeing to part ways with Frank Vogel following a disappointing season. One person who’s expected to help identify candidates in an advisory role is Basketball Hall of Fame coach Phil Jackson according to Marc Stein of ESPN.

With the Lakers involving Jackson in their search, does that mean the front office may ultimately decide to hire a coach who has previous ties to the former NBA Coach of the Year?

Lakers fans can relax. Chances are that won’t happen this time around, with few top candidates having any direct ties tracing back to Jackson, even if that’s what happened when they hired Kurt Rambis in 1999. Yet, Jackson also advised them when hiring Vogel too, so it’s not a guarantee they hire someone with direct ties.

In fact, the available list of coaches may prevent such a move.

Though we’ve already heard names such as Mark Jackson, Quin Snyder and several others linked to the Lakers’ head coaching vacancy, there’s another candidate who could now be associated with the gig now that Phil Jackson has gotten involved whether Laker fans want to hear it or not.

Aside from Shaw, there are other names such as Rambis himself, Luke Walton, and Tyronn Lue, the current head coach of the Los Angeles Clippers. Aside from Lue who’s likely happily locked into his gig, those other coaches listed above won’t even sniff an interview in this hiring cycle.

Instead, even though the Zen Master is involved in an advisory role, the Lakers are more likely to land a bigger name such as Steve Clifford, Mark Jackson or Mike Brown, unless Snyder or another unexpected coach firing happens in the next few weeks once the NBA Playoffs settle themselves.

This dream to coach the Lakers could lead a coach currently alive in the playoff race to still be let go, which might be what the front office is holding out hope for as they drag their feet in the coaching search.

If there’s one thing we know for sure, Jackson won’t suddenly unretire at the age of 76, even if he himself might be the best candidate for the job despite not coaching since 2011.

For LeBron James and the Lakers, the decision on the next coach in town will be a big one. Two years shy of winning the NBA Finals, the Lakers managed to miss the playoffs altogether. The next coach will enter with expectations to make the Lake show relevant again, as soon as possible. Luckily, there should be plenty of interest from outside candidates, we just have to wait and see who that might be.