Patrick Beverley tells Stephen A. Smith he needs to be drug tested for James Harden comments 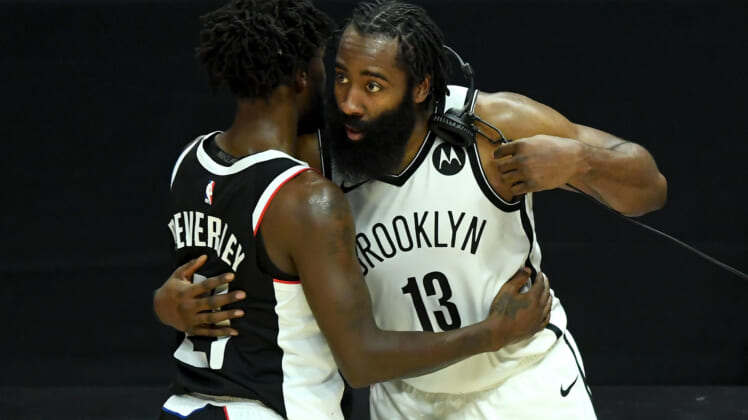 Count Patrick Beverley as one who’s ignored the rapid decline of James Harden over the past few seasons. Sure, it’s been a strange sight for a player who was frequently noted to have an “old man’s game”, meaning his skills likely wouldn’t quickly diminish as much as we’ve seen from other players who rely largely on their strict athletic abilities.

For Harden, he’s never been the one who jumps highest, runs the fastest, or is the most agile, he simply is a really good basketball player.

His points per game average has dropped a full 10 points since he last led the NBA in scoring and as teammate Joel Embiid noted at his season-ending press conference, we can’t expect Harden to be the same James of the past.

We witnessed the Philadelphia 76ers get eliminated in the Eastern Conference Semifinals, where Harden was largely ineffective, averaging just 18.6 PPG, far off the high 20’s, low 30-point per game effort we’ve come to expect from the three-time scoring champ.

Patrick Beverley believes Harden should get the max, a super max

Harden’s playoff performance may place the 76ers in a position where they no longer want to pay Harden the salary he currently demands, which, considering he has a $47.3 million player option to pick up this offseason, there could be some roster movement in Philly.

As far as Harden is concerned, with just one year left on his contract, he’s likely looking to sign an extension this offseason and he’s eligible for the supermax amount nearing $270 million across four years. This would allow Harden to earn $61 million when he’s 37 years old in 2026.

Many would argue there’s no upside to paying Harden such a massive contract extension when there’s no assurance he’s even a strong fit with Joel Embiid, Tyrese Maxey, and Co. under the Doc Rivers-led 76ers.

But not Pat Bev, who’s been stirring up emotions all week thanks to his appearances on ESPN’s First Take with Stephen A. Smith and J.J. Redick. Previously he ripped into Chris Paul, calling him a “cone” who doesn’t play defense.

His latest target is one many like to chastise, that being Steven A.

While Smith was making a compelling argument for Harden to not receive a max contract extension, Bev didn’t agree with that at all, and proceeded to essentially question whether Smith was in the right state of mind.

In the clip, Beverley can be heard interrupting, asking Smith if he’s been drug tested, telling him to “get off the weeeeed, man”. Here’s the clip, in all its hilarity.

Redick can’t help but chuckle with the rest of us as Bev and Steven A. go back and forth in a heated discussion over Harden. While we don’t have the full clip for you, more of the debate can be seen here.

It’s clear Bev is going to bat for Harden, a former teammate of his, but at the same time, any team willing to offer Harden a supermax would be crippling their future cap.

He’s undoubtedly still a talented player, but is Harden worth such a large portion of the team’s salary? He certainly wasn’t last season, if teams think he can improve, sure why not, but if the same Harden shows up next year, the Sixers, or whoever else has him, will be in trouble.