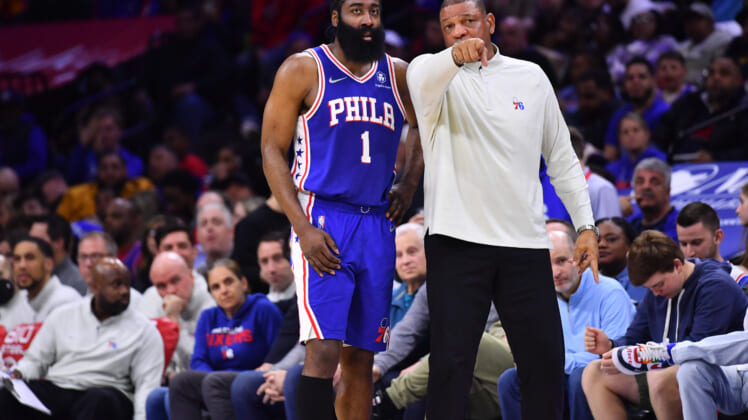 Fans of the Philadelphia 76ers are searching for hope following the fourth Eastern Conference Semifinals elimination of the past five years on Thursday night. With rumors ranging everywhere from possibly parting ways with Doc Rivers, to trading James Harden just three months after acquiring him, the upcoming changes could be monumental.

Or maybe there won’t be any big changes.

With Daryl Morey, the president of basketball operations for the 76ers meeting with the media today, he wasn’t ready to make any drastic moves, sticking with the decisions that have already been made.

Doc Rivers and James Harden both set to return to 76ers

When the Sixers hired Doc Rivers to be their head coach following the 2019-20 season, there was hope he could be the missing piece to help elevate an already-strong roster led by NBA All-Stars, including one of the 10 best players in basketball with Joel Embiid. Two years later and they haven’t gotten any further than their former coach, Brett Brown, brought them.

Here we are again, with the organization in the same place they were before. Could that mean the front office searches for a new head coach once again? Not according to their POBO.

Morey was asked point-blank if his head coach would return for a third season in Philly, to which he promptly responded with a “yes“. He continued on, saying “I think he’s a great coach“. Chances are, Rivers wants to return too.

Rivers isn’t alone in taking the heat from fans and media. James Harden was a complete disappointment, finishing with the worst effective field goal percentage of his regular-season career at .483%.

He wasn’t any better in the playoffs, averaging just 18.6 points per game, an 11-point reduction from two seasons ago with the Houston Rockets, prompting many to wonder just how much game Old Man James has left in his tank.

Still, the team stands by its newest star acquisition.

“We think with a full year with James (Harden), we can unlock what he brings to us.”

Daryl Morey on the untapped potential of James Harden

Morey echoed his same feelings about Rivers when talking about Harden, calling him a “great player”.

Based on the comments from Morey, the Sixers don’t appear to be in any rush to trade Harden just yet, but what else is he supposed to say?

What does Doc need to be more successful?

If moving away from Doc Rivers and James Harden are off the table, then how do the Sixers plan to take the next step toward an NBA Finals appearance?

Rivers says “there’s weaknesses clearly, that we have to improve“.

Evidently, moving off from James Harden won’t be the way to address these areas of need. And trading a first-round pick won’t be the solution either, as the team doesn’t have any they can trade until 2029.

But that’s ok, as the team doesn’t plan to keep adding starters, instead preferring to focus on improving the bench unit.

Maybe a full season from Harden, plus some bench additions can help the team reach another level of competition. For now, Harden has a $47.3 million player option, which he’s likely to pick up this offseason.

Related: James Harden trade and 2 other moves the Philadelphia 76ers must make