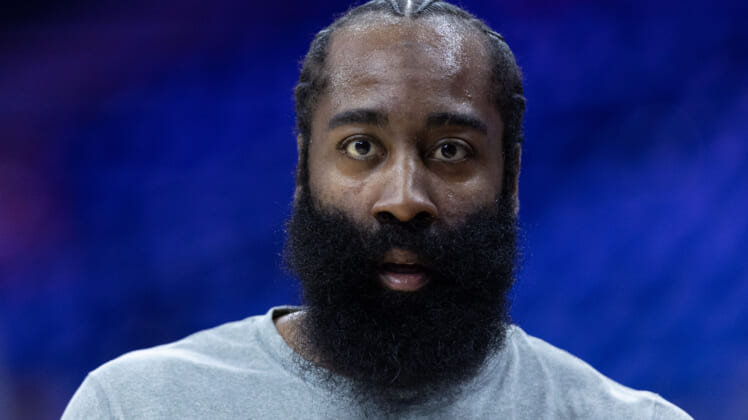 When the Philadelphia 76ers pulled off the James Harden trade back on February 10, they were seen as legitimate NBA title contenders.

Harden was swapped for a package centering around Ben Simmons and two first-round picks. The idea was to team him up with Joel Embiid to vie for a championship.

Pretty much from the get, Harden looked like a shell of his former NBA MVP self. That was magnified even further in the NBA Playoffs, which culminated in an ugly six-game series loss to the Miami Heat in the Eastern Conference Semifinals.

Philadelphia’s Game 6 performance left a lot to be desired, leading to many calling for head coach Doc Rivers to be fired.

While that might very well be the case, Harden did not help his coach in Game 6. The 32-year-old guard attempted all of nine shots in the game. He had one shot attempt and zero points in the second half — finishing with 11 points and four turnovers.

76ers front office head Daryl Morey now has some decisions to make. Could that potentially include pulling off a James Harden trade? We look at that and two other moves the 76ers must make.

This isn’t a knock on the veteran forward. He actually played well in the playoffs — averaging 17.2 points ad 7.5 rebounds on 50% shooting. At issue here is the 29-year-old’s contract. Harris is playing under a five-year, $180 million deal. He’s set to count nearly $77 million against the cap over the next two seasons.

Philadelphia could easily go with the 6-foot-5 Matisse Thybulle at thet three in a small-ball lineup. He provides more on defense and still boasts a tremendous amount of upside. Unfortunately, the 76ers would likely have to attach a young player to any Harris trade because they don’t have the first-round picks to offer up.

Two seasons in Philadelphia. Two ugly premature exits from the NBA Playoffs. A lack of success from a broader perspective in the postseason since he left the Boston Celtics following the 2012-13 season. A lack of taking responsibility.

“Well, it’s easy to use me as an example. But I wish y’all would tell the whole story with me. All right?”

Doc Rivers on playoff failures back in April

As some point doing the same thing over and over again while expecting a different result just doesn’t make sense. Philadelphia is in win-now mode. Morey himself isn’t the most patient individual. The team’s ownership group, led by Josh Harris, has exhausted a ton of cash on this team. Finding a new head coach who doesn’t have to ask his team to put up a fight in an elimination game needs to be in the cards here.

After giving up multiple first-round picks, Ben Simmons and Seth Curry or Harden roughly three months ago, why would Philadelphia move off the enigmatic guard? Well, it’s rather simple. He has regressed big time and didn’t fit in well with teammate Joel Embiid after being acquired from Brooklyn.

Embiid himself spoke on these issues recently.

“I’ve been saying all season since he got here, (Harden) needs to be aggressive and he needs to be himself.”

About that? Harden took one shot in the second half of Philadelphia’s Game 6 loss to the Heat. Outside of an 18-point second-half performance in Game 4, he was brutal after halftime in the six-game slate (14 total points, 10 turnovers in five games).

Harden has a player option of $47.37 million for next season. Given his performance in 2021-22, he’ll likely pick up said option. If so, there would be some interest in his services simply based on his previous success. If that is indeed the case, Philadelphia must bite the bullet and pull off a James Harden trade. It’s that simple.