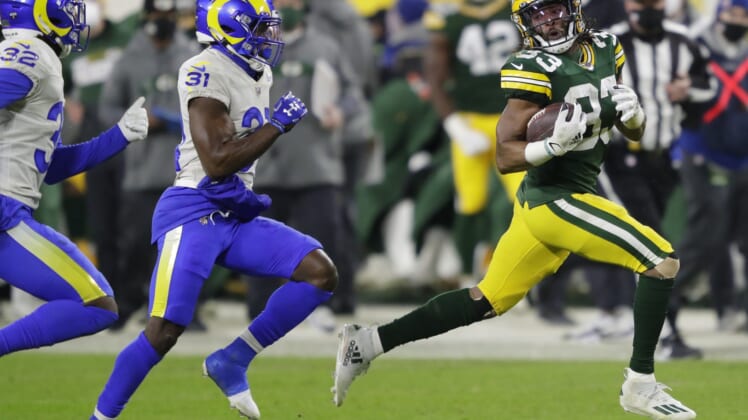 Green Bay Packers running back Aaron Jones is one of the top players set to hit the NFL free agent market later in March. Of course, that’s dependent on Green Bay opting not to place the dreaded franchise tag on its star ball-carrier.

There’s been a lot of talk about behind-the-scenes of contract issues between Jones and the Packers. He wants to be a top-five paid running back in the NFL.

Having put up 3,017 total yards with 30 touchdowns at a clip of 5.7 yards per touch over the past two seasons, Jones has more than earned that. However, the Packers could view him as more of a product of the system with reigning NFL MVP Aaron Rodgers leading the charge on offense.

In talking about his impending free agent, Packers general manager Brian Gutekunst seemed to break some news on Tuesday.

This seems to be a clear indication that Green Bay has no interest in utilizing the franchise tag on Aaron Jones ahead of the deadline later in March. Said tag would guarantee the 26-year-old running back roughly $11.1 million, the average of the five highest-paid backs in the NFL right now.

For their part, the Packers currently find themselves $11.1 million over the estimated 2021 NFL salary cap with free agency set to begin. Restructuring Aaron Rodgers’ contract will save a ton against said cap. Even then, a strict $11.1 million cap hit in 2021 for a running back might not make sense for Green Bay.

With hopes dwindling that the two sides will come to terms on an extension ahead of the March 9 NFL franchise tag deadline, Jones is now likely to hit the open market.

Recent suggestions are that there’s mutual interest between Jones and the Miami Dolphins. With Miami looking to upgrade its rushing attack, this could be a perfect fit. The team is also in a great salary cap situation and could afford to make Jones a top-five paid running back on a long-term deal.

Of those with needs at running back and in good cap situations, the New York Jets also make a ton of sense. However, it remains to be seen if general manager Joe Douglas wants to pay top money to a running back after the entire Le’Veon Bell fiasco.

Aaron Jones himself is in a tricky situation here. Running backs have not been valued in NFL free agency over the past several years. The market is not going to be too robust in terms of interested teams if his current contract demands remain.

That could even potentially lead to a reunion with the Packers after free agency starts. Hard feelings between the two sides could also lead to a divorce regardless of the market Jones is met with when the market opens.

It’s certainly one of the top storylines for the Packers as they attempt to navigate through an important offseason after yet another failure in the NFC Championship Game.

Whether this means Aaron Jones returns to Green Bay remains to be seen. However, it’s now looking less likely by the day.

Click below for more Green Bay Packers news and rumors.