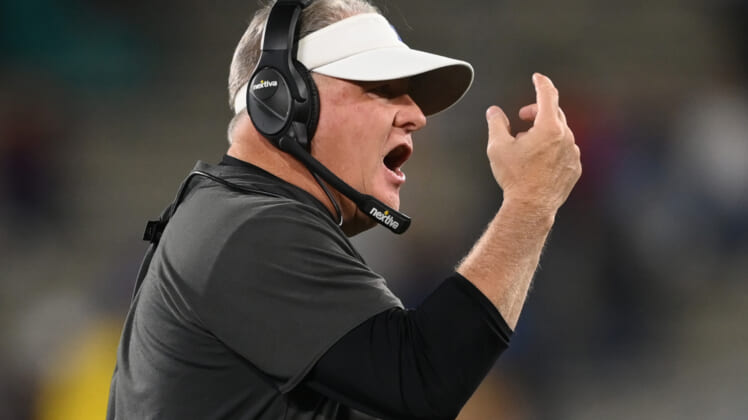 Mario Cristobal is headed to Miami, kicking off another coaching search for the Oregon Ducks. With this program looking for a new head coach for the third time since 2012, let’s examine some potential Oregon coaching candidates.

The Ducks certainly did what they could to keep Cristobal. But with the Hurricanes offering him a multi-year deal worth $8 million per season, the Miami native couldn’t pass it up. Oregon is a late entrant into the coaching carousel with USC, LSU, Oklahoma and Notre Dame all landing hew head coaches. But this is still a very attractive job, especially with the Pac 12 Conference set to take a step forward.

Iowa State head coach Matt Campbell needs to be atop the Oregon Ducks wishlist. If Lincoln Riley turned down the trojans, it’s widely believed Campbell would have been the coach landing in California. With Cristobal departing, this is an excellent opportunity for the Ducks to land one of the top coaches in college football.

Campbell earned his first opportunity to be a head coach at Toledo. With the Rockets, the team went 9-4 in his first season at the helm. While Toledo dropped to a seven-win season the following year, it then finished with consecutive nine-win seasons. He joined the CYclones in 2016 and within two years, turned this team into a Big 12 Conference contender. Notably,Campbell’s teams have four victories against top-10 opponents dating back to the 2017 season

It’s worth noting that Campbell doesn’t have direct ties to the West Coast as an Ohio Native who spent his entire coaching career in the Midwest. But he is clearly interested in taking on a bigger job and his smarts, leadership and coaching ability would all be great additions for Oregon.

If the Oregon Ducks want an experienced head coach with West Coast ties, Kalani Sitake must be considered a favorite. While he is a BYU graduate and that might be a compelling force to convince him not to leave the Cougars, he is also one of the lowest-paid coaches among top-25 programs and BYU is realistically at its ceiling.

Sitake’s road to becoming the Cougars’ head coach includes familiarity with the Civil War. Before being hired by BYU in 2016, he served as Oregon State’s defensive coordinator. But it’s really his work with the Cougars that stands out. After three seasons in four years with seven-plus wins, BYU has now posted double-digit win seasons and will likely finish 2021 as a consensus top-10 team.

Sitake has also played a huge role in identifying and developing future NFL talent. Jamaal Williams, Ty’Son Williams, Zach Wilson and Brady Christensen are all making an impact for NFL teams this season. We’ve also seen Sitake-coached teams take down Pac-12 foes regularly, , boasting a 4-0 record vs. them in 2021.

Give Oregon’s financial resources, athletic facilities and recruiting advantages to Sitake and we could be talking about him as one of the top college football coaches before long.

Elliott played at Clemson, working his way up from walk-on to team captain during his collegiate career. His ability to lead players led him to coaching, with stops at South Carolina State (2006-’07), Furman (2008-’10) and then Clemson. After joining the Tigers as a running backs coach in 2011, he became co-offensive coordinator in 2015 and now serves as assistant head coach, tight ends coach and OC.

As a recruiter, Elliott is consistently named one of the top-20 recruiters in college football. He is also a fantastic coach and teacher, highlighted by the likes of Tee Higgins, Amari Rodgers, Travis Etienne, Mike Williams, Hunter Renfrow and Sammy Watkins all making impacts at the highest level. Oregon would allow Elliott, a 2017 Broyles Award winner, to return to the West Coast and he’d be in a position to succeed quickly in his first head coaching gig.

Sometimes, reunions are meant to happen. While Mike Bellotti is the winningest coach in Oregon Ducks history, everyone associates this program with Chip Kelly. During his glory years in Autzen Stadium, he won Pac 12 Coach of the Year twice (2009, 2012) ad the Ducks were crowned Pac 12 champions three times (2009-’11). Then he gave the NFL a shot.

While things clearly didn’t go well at the professional level and success hasn’t been found at UCLA (18-25 in four seasons), there should be no doubt about his coaching and recruiting ability. He crushed it with Oregon’s resources during a four-year tenure, posting one of the best winning percentages (.868) in college football. As for that bowl record, it includes victories in the Rose Bowl and Fiesta Bowl with a loss in the BCS National Championship Game.

This would be a splashy move, the perfect response to USC hiring Riley. With these two minds coaching together, the Pac-12 would be far more entertaining and relevant than it has been in nearly a decade.

Mike Elko, one of the best defensive coordinators in college football, is ready to be a head coach for a Power 5 program. A coaching career that started at Stony Brook (1999) as a graduate assistant and linebackers coach saw him steadily climb the ranks. Notre Dame hired him as defensive coordinator in 2017 and he was scooped up by Jimbo Fisher a year later.

As Notre Dame’s defensive coordinator in 2017, the Fighting Irish, held opponents under 370 total yards per game and surrendered a 34.62% conversion rate on third downs. He took over an Aggies unit that needed some work and has turned it into one of the best defenses in college football. Texas A&M allowed the eighth-fewest points per game (17.1), ranked top-30 in total yards allowed (343.7 per game) and the Aggies surrendered the 10th-lowest conversion rate on third downs (32.54%).

It might be time for the Oregon Ducks to change their identity as a program, given the two blowout losses against Utah. Elko is more than capable of setting a new tone for this team and he would help make this one of the best defenses on the West Coast.