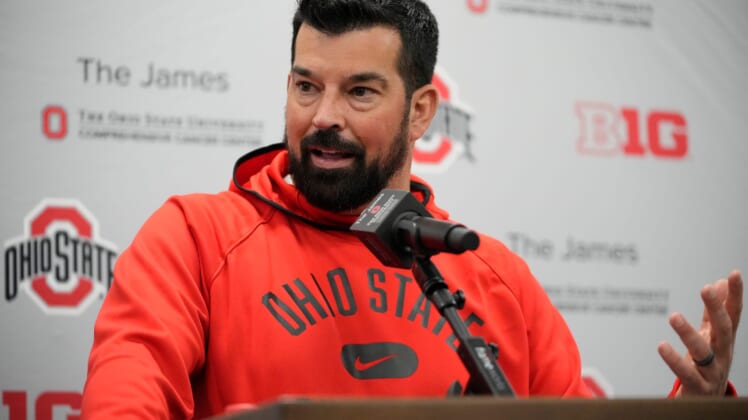 Name, image and likeness deals are the most prominent story before the 2022 college football season. As Nick Saban, Jimbo Fisher and Deion Sanders trade barbs, Ohio State Buckeyes coach Ryan Day is outlining a NIL budget for the program.

Day, one of the highest paid college football coaches in 2022, recognizes the landscape of the sport. NIL deals are one of the biggest draws for athletes to top programs, players want to be compensated for their skills. Until the NCAA or Congress figures out guidelines for deals to eliminate the current ‘Wild West’ environment, the Buckeyes need to be prepared for the existing climate.

Meeting with Ohio State supporters during a Columbus business meeting, per Cleveland.com, Day said the Buckeyes’ program needs a $13 million NIL budget to maintain its roster and to remain a contender for the College Football Playoff.

Winning doesn’t come cheap. In an era when quarterbacks are more valuable than ever before, Day indicated the present cost of a high-end quarterback is $2 million in NIL funds. Protecting that face of the program and also landing top defensive talent requires another $1 million for top talent.

The message to Buckeyes’ boosters is clear. If they want to keep watching this program competing with the best teams in college football, it requires spending more money on the student-athletes. While that means less money for the school itself to spend however it chooses, the money can now go directly towards the players making an impact on the field.

This is the reality of college sports. Saban acknowledged it when talking to the Alabama Crimson Tide boosters and every coach at a marquee program is sending the same message to business leaders supporting their programs. If you want to win, players need to get paid more or you’ll become a mid-tier team with angry fans and boosters.