Former New England Patriots first-round pick N’Keal Harry is getting the change of scenery that is so much needed.

According to NFL Media’s Mike Garafolo and Ian Rapoport, the wide receiver has been dealt to the Chicago Bears for a seventh-round pick in the 2024 NFL Draft.

Harry, 24, had fallen deep into Bill Belichick’s dog house after New England made the former Arizona State standout the No. 32 pick back in 2019. In fact, there didn’t seem to be a path for him to make the final roster following training camp later this summer.

It was a year ago next month that Harry actually requested a trade from the Patriots due to a lack of playing time. 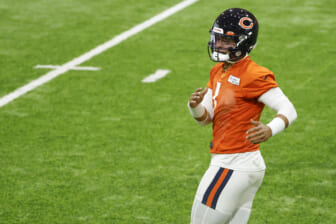 N’Keal Harry gets fresh start with the Chicago Bears

New England’s depth chart at wide receiver was not indicative of Harry making much of an impact this coming season. The likes of DeVante Parker, Kendrick Bourne, Jakobi Meyers, Nelson Agholor and Tyquan Thornton were all seemingly ahead of him prior to this trade.

This won’t be the case for a receiver-needy Bears team headed by young quarterback Justin Fields. Harry could make an immediate impact in Chicago with its wide receiver room void of proven talent behind Darnell Mooney.

Entering the final year of his rookie deal, Harry will have to show his stuff with Bears training camp set to open in two weeks. If that doesn’t happen, we could be witnessing the end of his fledgling NFL career.