While the NHL is under intense scrutiny for the news surrounding the Chicago Blackhawks and their actions in the Kyle Beach sexual assault scandal, NHL prospect Luke Prokop is continuing to be a bright spot in the league.

He made headlines originally for being the first openly gay prospect in the NHL, which received tons of support from various teams across the league. He tweeted his message in July, inspiring many in the hockey community.

Now, he is once again using his platform to make a difference in the hockey world and in his native Canada. Early today, Prokop announced via Twitter that he would donate $10 to benefit youth mental health for every shot on goal he takes this season. The initiative will be called “Shots for Impact.”

Luke Prokop currently plays with the Edmonton Oil Kings in the WHL, who are back-to-back Central division champions in their league. His $10 donation will be made to Canada’s Kids Help Phone e-mental health service and will be matched by his team, the Oil Kings, as well as the Nashville Predators’ foundation and the Edmonton Oilers Community Foundation.

“I’m very excited to create this partnership to help raise awareness for our youth about the assistance Kids Help Phone can provide,” said Prokop in a statement.  “Not only for individuals in the LGBTQ2S+ community, but for anyone in general.

“I think nowadays, there should be more accessibility and that no matter where you are in the world, you can get help for your mental health and Kids Help Phone does such a great job of that.  I’m very pleased to help highlight what this organization does and to hopefully help them grow.”

– Luke Prokop, in a statement

The 19-year old prospect and trailblazer is originally from Edmonton, Alberta, Canada. As a defenseman, he was selected in the third round, 73rd overall, in the 2020 NHL draft. He is under contract with the Preds through the 2023-2024 season, with a cap hit of $811,667.

Early on in the 2021-2022 WHL season, Prokop was traded from the Calgary Hitmen to the Edmonton Oil Kings, and is already seven games into the new campaign. In those seven games, though, Luke Prokop recorded a total of four goals and an assist and, more importantly to this initiative, a grand total of 25 shots on goal.

Last season, in which he only appeared in 15 contests for the Calgary Hitmen, Prokop recorded 52 shots. In a more complete 2019-2020 season, in which Luke Prokop played 59 games, he posted 83 shots on goal, his highest single-season tally to date. That would mean $830 donated to Kids Help Phone alone, with donations matched by the three organizations to total $3,320 donated to the e-mental health services.

In his entire WHL career of 157 games, Luke Prokop has taken 234 shots on goal. 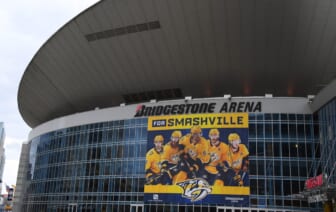 The charity Prokop selected, Kids Help Phone, is Canada’s only 24/7 e-mental health service that offers free, confidential support to young people in both of Canada’s official languages, English and French. Canadian youth use the service and connect with a professional counselor by calling 1-800-668-6868, or exchanging messages with a volunteer who is trained to help in mental health situations by texting TALK to 686868.

2020 saw the charity make 6 million connections with Canadian youth through phone, text and online, and save over 4,200 lives through active rescue. 51% of the youth who reached out to Kids Help Phone by text in 2020 identified as LGBTQ2S+.

Recently, Prokop celebrated National Coming Out Day on October 11, tweeting in support of the LGBTQ2S+ community.