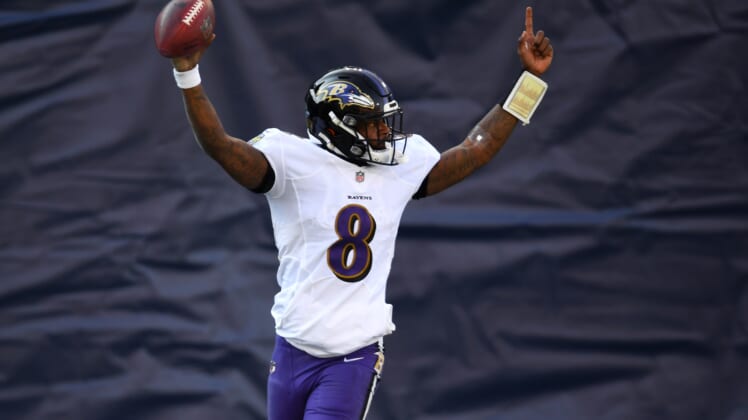 Another NFL Wild Card game is in the books, with the Baltimore Ravens and Tennessee Titans putting on a show for football fans. The NFL Playoffs are all about highlights and unforgettable moments, which are exactly what Lamar Jackson and Co. provided on Sunday.

Early in this playoff rematch, we saw shades of the Divisional Round upset from last year. Behind Ryan Tannehill and A.J. Brown, the Titans started rolling early with a 10-0 lead. Already facing a 10-point deficit after the first quarter, the Ravens needed some magic from Jackson and he delivered. As is often the case, the reigning NFL MVP did the unthinkable with his legs, flipping the game in seconds and sending this NFL Wild Card clash to a tie at halftime.

Jackson never looked back after that interception. Baltimore’s offense controlled the clock and its defense completely erased Derrick Henry, tuning a double-digit deficit into a 20-13 victory. At long last, the reigning NFL MVP silenced the critics and proved he could come through in the playoffs.

Let’s take a look at our winners and losers from the Baltimore Ravens’ 20-13 NFL Wild Card victory over the Tennessee Titans.

Lamar Jackson heard the doubters after his disappointing effort against this same team last year. Many questioned if he could actually get it done in the NFL Playoffs, suggesting he might be the NFL’s version of Paul George. After throwing an ugly interception early, the criticisms over his ability to shine grew louder. All Jackson did was quiet the nose, humiliate the Titans’ defense and delivered on NFL Wild Card Weekend.

Trailing by 10, Jackson responded with a scoring drive to make it a one-score contest. On his next series, the 24-year-old found himself surrounded by defenders. So, he found a lane and turned on the jets for a remarkable touchdown run. It instantly got everyone going, flipping the script for Sunday’s game and filling Jackson with confidence. He kept killing Tennessee with his legs, sprinting to daylight and a 136-yard performance on the ground. Sprinkle in some brilliant throws and it was more than enough to secure the victory.

When the Titans needed a dominating performance from Derrick Henry in Week 17, he delivered. Time and time again, this All-Pro back has delivered game-winning efforts. He even delivered the knockout blow when the Titans faced Baltimore during the regular season. But this time around, Henry couldn’t get anything going and his worst performance of the season came at an unfortunate time.

Tennessee fed him early, but those 14 carries only turned into 29 rushing yards in the first three quarters. But this team kept the faith, especially since Henry averaged 6.6 yards per carry in the fourth quarter during the regular season. Thanks to Baltimore’s offense controlling the clock and Henry’s ineffectiveness as a pass-catching threat, he received just five carries in the final quarter for 11 yards. A 40-yard performance and a playoff exit, just a crushing end to an unforgettable season by Derrick Henry.

NFL Scouting Combine: NFL to reportedly determine the fate of 2021 combine this week

One of the best things about the NFL Playoffs is seeing great players face off in head-to-head matchups. This classic AFC Wild Card clash meant a matchup between Pro Bowl receiver A.J. Brown and 2019 All-Pro cornerback Marlon Humphrey. It didn’t take long before two of the best players at their respective positions drew the spotlight.

Humphrey had no answer for Brown’s physicality and strength. While both players measure at 6-foot, Tennessee’s No. 1 weapon made his 30-pound advantage and long arms count. The 23-year-old made a ridiculous catch near the sideline, beating tight coverage, then showed some veteran savvy with a slight push before a leaping touchdown grab. Keep in mind, Humphrey entered Wild Card Weekend as Pro Football Focus’ No. 12 cornerback, with only 9.7 yards allowed per reception. By the time Sunday’s game was over, Brown beat him for 83 yards and a touchdown. He’s really the only player on the Titans’ offense who showed up for this one.

There are teams that struggle to put pressure on the opposing quarterback and there’s the Tennessee Titans. In the regular season, Tennessee’s defense finished with the fourth-lowest quarterback hurry rate (7.4%), the third-fewest sacks (19) and the second-worst pressure rate (17.3%). Keep in mind, those numbers are with Jadeveon Clowney (six quarterback hits) included. Quite simply, the Ravens had a distinct advantage in this matchup and it’s why they were the favorites. Then, Baltimore’s offensive line didn’t show up.

The Ravens allowed four sacks and five quarterback hits in the first half. Quite frankly, those numbers would be even worse if Jackson wasn’t one of the greatest athletes in NFL history. It played a crucial role in the slow start and kept Jackson from taking some shots downfield for big plays. Fortunately, Jackson and offensive coordinator Greg Roman found a way around the struggles up front and pulled out the victory.

Baltimore’s front office received a ton of criticism this offseason for not surrounding Lamar Jackson with enough weapons. It didn’t help general manager Eric DeCosta that Marquise Brown, the No. 25 overall pick in the 2019 NFL Draft. It hurt even more that the likes of Deebo Samuel and A.J. Brown were taken in the second round. Fortunately, after a season full of frustrating drops, Hollywood Brown earned the spotlight in the NFL Playoffs.

When Jackson needed a big play, Brown came through for him. Of the nine passes thrown towards the 5-foot-9 receiver, he pulled down seven of them for 109 receiving yards. Brown showed some nifty moves in space, snagging short passes and turning them into first downs. We even saw him get involved in some wizardry on the offense, turning two carries into 19 rushing yards. After so many struggles during the regular season, this was a fantastic moment for the 23-year-old receiver.