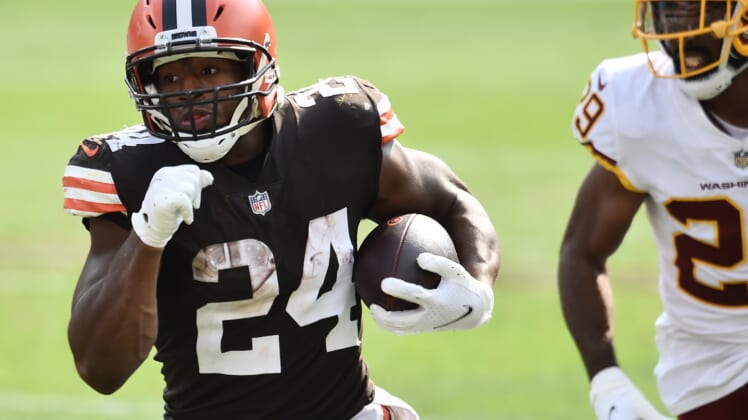 NFL injury report: It’s been a long NFL season as we head into Week 10 with the list of fantasy stars going down with injuries growing by the day. Fortunately, as we head into a new week, there is some positive news for some of the NFL’s top players.

In recent weeks, we’ve seen fantasy stars like Nick Chubb, Miles Sanders and Joe Mixon go down with significant injuries that cost them multiple games. Fortunately, coming off a Week 9 bye, a few top running backs stand a great chance of returning to action next Sunday.

Unfortunately, the news isn’t all positive around the NFL. We saw more marquee names go down in Week 9 and their availability for the upcoming slate of games is in serious jeopardy.

Unfortunately, the news isn’t all positive around the NFL. We saw more marquee names go down in Week 9 and their availability for the upcoming slate of games is in serious jeopardy.

The Browns have centered their offense around the running game this season, which made losing Chubb to an MCL sprain a devastating blow. After suffering the injury in Week 4, the Browns knew they had to be cautious with their star running back. Now, coming off the Weke 9 bye, things look promising.

According to NFL Network’s Ian Rapoport, the Browns are hopeful Chubb can return for their Week 10 matchup against the Houston Texans. He is expected to return to practice this week and is ahead of schedule in his recovery. Chubb practiced without a knee brace on Thursday and was activated off IR on Saturday. With that news, he will play in Week 10 against the Houston Texans.

Chubb’s return is great news for fantasy managers with him on their roster, but it hurts those with Kareem Hunt. Coming off consecutive games with 60-plus rushing yards and 14-plus carries, he was taking advantage of additional opportunities. With Chubb now back in the picture, Hunt falls to a mid-tier RB2. Meanwhile, Chubb will be a low-end RB1 in fantasy rankings for the rest of the season. If either player went down, the other would be a top-eight fantasy back.

When healthy this NFL season, Sanders has been a playmaker in Philadelphia’s offense. The second-year running back has 434 rushing yards on the year, averaging 6.1 yards per carry. Unfortunately, a knee injury in Week 6 sidelined him for two games.

On Sunday morning before Week 9, Rapoport reported that Sanders will return to practice this week coming off the bye. Sure enough, that has happened. Sanders was a limited participant in practice Wednesday and improved to full participation on Thursday. He looks very likely to return on SUnday.

Fantasy football rankings: Miles Sanders a top-10 running back for remainder of season

Assuming Sanders makes it through a full week of practice, he will reclaim his role as the featured running back in this offense. It immediately pushes Boston Scott back to the waiver wire, where he should remain barring an injury.

Sanders is also a player for fantasy managers to be excited about in the second half. He’ll face the Seattle Seahawks I Week 12 and an atrocious Green Bay Packers’ run defense in Week 13. For the fantasy football playoffs, just a Week 15 clash against the Arizona Cardinals (126.1 rushing yards allowed per game) followed by a Week 16 matchup versus the Dallas Cowboys (157.0 rushing yards per game). With this offense getting healthier, Sanders could go off.

Mixon suffered a mid-foot injury in Week 6 against the Indianapolis Colts, an ailment we’ve seen pop up multiple times this season. While it does cause a multi-week absence, creating a hole in fantasy football lineups, the Bengals’ schedule worked out for his recovery timetable.

After missing two games, Mixon received the bye week to get closer to 100%. The Athletic’s injury algorithm highlights that a four-week recovery is in the best interest of the player’s health, reducing the risk of a setback. Unfortunately, the star running back will need even more time after missing practice throughout the week.

In their final injury report, the Bengals listed Mixon as doubtful for Sunday’s game. After another day of rest, per ESPN’s Adam Schefter, Mixon will be inactive against the Pittsburgh Steelers. In his absence, Giovani Bernard returns to his role as the starter.

A matchup against the Pittsburgh’s defense might not seem ideal, but it’s not as bad as one might think. While Pittsburgh’s defense is allowing the ninth-fewest rushing yards per game (102.8), they were just gashed for 144 yards by the Dallas Cowboys and allowed 265 yards to the Baltimore Ravens the previous week.

Bernard won’t post huge rushing totals, but he is a safe bet for 12-plus carries and four-plus catches. In PPR leagues, fire him up as a reliable RB2 for Week 10.

Just as Justin Herbert started to settle in as the best rookie in the NFL, Los Angeles lost its star running back to a significant hamstring strain. The Chargers placed Ekeler on injured reserve after Week 4 and head coach Anthony Lynn said in late October that Ekeler would be back “later than sooner.”

While there are few updates from the team, Ekeler is keeping fans in the loop on Instagram. He started running last week and is steadily increasing his activity. He won’t be available for Week 10, but a Week 12 return against the Buffalo Bills seems possible. We’ll keep an eye on the NFL injury report and media coverage in the weeks ahead and provide updates.

It seems like we can’t have nice things for long in 2020. McCaffrey, who is all too familiar with the NFL injury report this season, returned in Week 9 after a lengthy absence. The All-Pro running back delivered a monster game with 151 scrimmage yards and two scores on 28 touches, the kind of performance fantasy owners expect from the No. 1 overall pick.

Sadly, per Ian Rapoport, McCaffrey suffered a shoulder injury against the Kansas City Chiefs. While MRI results determined he avoided a significant issue, McCaffrey won’t play on Sunday against the Tampa Bay Buccaneers. Carolina is hopeful he could return in Week 11.

This is a familiar situation for many this fantasy season. When McCaffrey went down, running back Mike Davis stepped into his role and thrived. As Carolina’s starter this year, Davis racked up 349 rushing yards (4.2 ypc) with 30 receptions for 170 receiving yards and four total touchdowns. He will be a high-end RB2 in Week 10 against the Tampa Bay Buccaneers.

The 49ers have been devastated by injuries this season, as we saw on full display in Week 9 on Thursday Night Football. Jimmy Garoppolo and George Kittle won’t be back any time soon, but fantasy owners could see a few stars return on Sunday.

Kyle Shanahan told reporters after Week 9 that Deebo Samuel and Raheem Mostert have a chance to return in Week 10. Both players weren’t close to playing against the Packers, due to a short week, but 10 days of preparation could have put them on track to play. Unfortunately, the 49ers’ optimism quickly vanished and neither player will be active on Sunday.

The 49ers are one of the few teams where we’re not especially worried about the surrounding weapons when the starting quarterback goes down. Shanahan is an offensive mastermind, with the ability to find ways to put his playmakers in great position to succeed.

Mostert and Samuel are two players worth buying low on in fantasy football. After the team’s Week 11 bye, San Francisco faces the Buffalo Bills (Week 13), Washington Football Team (Week 14) and Dallas Cowboys (Week 14). Now is the time to try and acquire either player in fantasy leagues, their value couldn’t be much lower.

After suffering a concussion in Week 9 against the Tennessee Titans, Chicago hoped a longer week would give its starting running back enough time to clear the NFL’s concussion protocol. Unfortunately, per The Chicago Tribune‘s Dan Wiederer, Montgomery has been ruled out for Week 10. The Bears will add Lamar Miller to their active roster before Monday’s game and he will step into an immediate role. However, given Chicago’s atrocious offensive line and the state of this committee backfield, avoid everyone but Allen Robinson in Week 10.

Injuries have been an issue for Carson in recent years and the 2020 season is no different. He suffered a mid-foot sprain in Week 7 against the Arizona Cardinals. Coming off a Week 8 bye, Carson wasn’t able to practice this past week. After missing practice throughout the week, the Seahawks ruled him out for Week 10.

DeeJay Dallas will split touches with Travis Homer and Alex Collins, with Carson and Carlos Hyde inactive. Homer racked up 64 receiving yards on three grabs, with 50 coming on a catch-and-run, while Dallas received 46% of the carries. Neither would be reliable options against Los Angeles.

One of the most electrifying rookies in the NFL this season, Shenault exited Sunday’s game against the Houston Texans with a hamstring injury and couldn’t return. It’s a bit troubling, given he fell to the second round due to durability issues, but there is good news.

According to Ian Rapoport, the MRI results on Shenault’s hamstring provided good news. Unfortunately, after being limited in practice this week, the Jaguars have ruled him out for Sunday’s game. It will create more targets for D.J. Chark, who gains even more value with Green Bay’s No. 1 cornerback Jaire Alexander sidelined.

Minshew is dealing with multiple fractures and a strained ligament in his right thumb. He missed Sunday’s game against the Houston Texans, creating an opportunity for sixth-round pick Jake Luton to step in. On Friday, the Jaguars ruled Minshew out for Week 10. Luton gets another start, but we’re avoiding him against the Packers, even with lockdown cornerback Jaire Alexander (concussion) plays.

Poised for a big game on Sunday, Johnson left in the first quarter after taking a blow to his head. He was quickly diagnosed with a concussion and ruled out for the game. Now, per ESPN’s Adam Schefter, Johnson is headed to injured reserve. As a result, he will miss Houston’s next three games.

Duke Johnson will step in as the primary running back. He carried the ball 16 times on Sunday against the Jacksonville Jaguars, racking up 41 rushing yards and a short touchdown. He’ll be a low-end RB2 in PPR leagues.