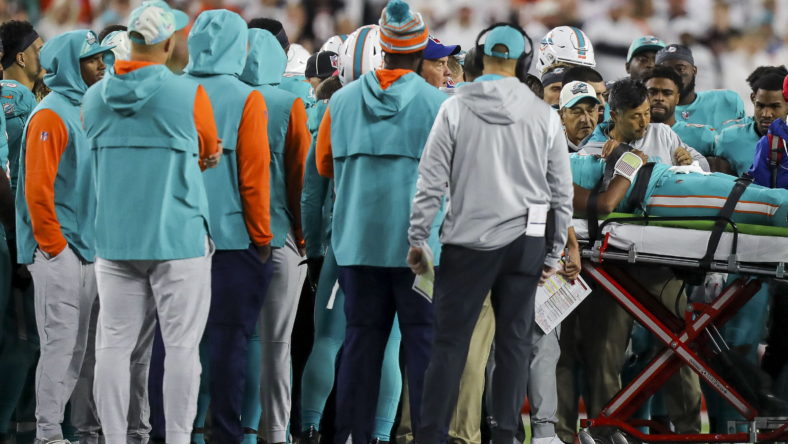 The Miami Dolphins and the NFL as a whole received a ton of criticism after star quarterback Tua Tagovailoa came back into Sunday’s game against the Buffalo Bills after seemingly suffering a concussion in the first half.

Tua was seen wobbly after Bills linebacker Matt Milano committed a roughing the passer penalty. It sure looked like he was nowhere near ready to come back in the game.

Almost immediately after Miami’s game against Buffalo had been completed, the NFLPA indicated that an investigation into the NFL’s in-game concussion procotols would take place.

“The NFLPA, the NFL Management Council or any player involved in an alleged failure by a club employee or other member of a club’s medical staff to follow any of the mandatory steps required by the NFL’s Concussion Checklist shall each have the right (independently or collectively) to bring forward a complaint about such alleged failure to the Representatives, which complaint shall be submitted in writing.”

Miami’s star quarterback was back on the field to open NFL Week 4 against the Cincinnati Bengals on Thursday. Unfortunately, he left the game ahead of halftime after being on the receiving end of a violent hit from Bengals defensive tackle Josh Tupou.

As you can see in the video, Tua was down on the field with that is being called decorticate posturing. That is to say, his hands involuntarily moving in an awkward position after being slammed on to the turf in Cincinnati.

It was deemed during last Sunday’s game that Tua did not suffer a concussion. Hence, why he was able to return to the field and play with just three days rest Thursday evening.

As for the injury we saw Thursday evening, Tua was stretchered off the field and taken to a local hospital in an ambulance with injuries to his neck and head. He did have movement in all of his extremities. Despite this, there’s a ton of concern over the injury and how Tagovailoa looked after the hit. Primarily, decorticate posturing.

“Decorticate posture is an abnormal posturing in which a person is stiff with bent arms, clenched fists, and legs held out straight. The arms are bent in toward the body and the wrists and fingers are bent and held on the chest. This type of posturing is a sign of severe damage in the brain. People who have this condition should get medical attention right away.”

The NFL has obviously been in the news over the past several years due to his previous handling of concussions. Multiple lawsuits have been filed and settled surrounding former players who were diagnosed with Chronic traumatic encephalopathy (CTE) postmortem.

While we have absolutely no idea what is happening behind the scenes right now, some were quick to point out Tua actually playing on Thursday after the incident in question this past Sunday.