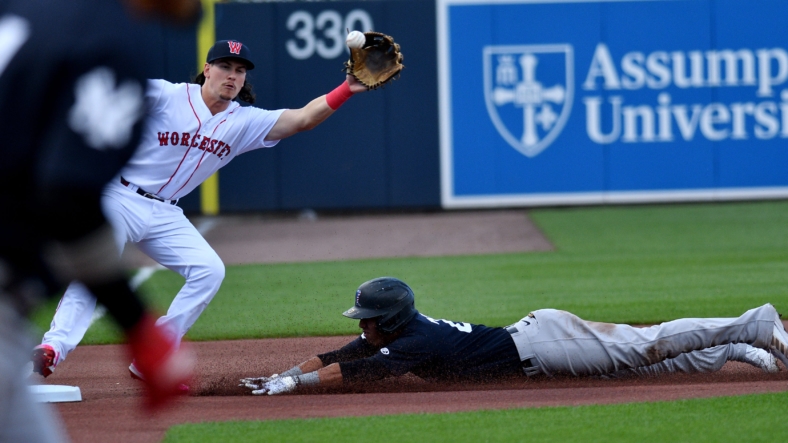 The moment has come for New York Yankees fans. The Yankees have promoted infielder Oswald Peraza ahead of today’s expansion deadline. As per Steve Granado, the Triple-A Railriders’ play-by-play voice, Peraza was removed from the game and immediately told to pack his bags. Baseball columnist Joel Sherman then confirmed the transaction which would clear Peraza to join the team.

The 22-year-old quickly broke onto the scene in 2017 after the Yankees snatched him a year prior in the International Draft. He adapted quickly and sped through the Yankees system. It has been a long way coming for the shortstop and he’ll provide an instant impact when he joins the team in Tampa Bay. The shortstop will accompany his counterpart-Oswaldo Cabrera who received his promotion just weeks ago.

Oswald Peraza is just the spark the Yankees needed

Peraza has proved that he can adapt to any level which shouldn’t be any different when he suits up in pinstripes. The Venezuelan was stifled through the first half at Triple-A, but his bat made a quick turnaround which caught the attention of Brian Cashman. He hit 19 homers in Triple-A with a .259/.777 split and 33 stolen bags. Although the past 50 games more or less, Peraza hit .316 with a .942 OPS and 22 stolen bases.

Defensively, his primary spot is short, but he can stretch it out at second with 10 games in his pocket. He is scouted to possess a competent arm with smooth hands which could be beneficial if the Yankees exercised his arm at third. It’s tough to identify where Boone would implement Peraza in the field, considering that Kiner-Falefa is the current employee. Second could be an option, although it would put Gleyber Torres out of commission.

The Yankees offense will be hard to stop with Oswald Peraza

The Yankees’ offense is already quite loaded and when you include perennial talent in Peraza, there’s no stopping New York. He balances his raw power and knack to hit for average which merges quite well. The infielder has naturally developed a keen eye in the box and can lay off pitches that don’t look appealing. His speed around the bases is certainly a weapon that the Yankees can utilize in pinch-run situations.

Ranked third in the Bombers system, Peraza would immediately slide into the back of the lineup. There’s certainly no room at the top of the order, which would allow Boone to insert him almost anywhere.

With the addition of Peraza’s promotion, the Yankees simultaneously reinstated Marwin Gonzalez from the paternity list. Peraza should get a chance to make his MLB debut at some point this weekend as they begin a three-game set against the Tampa Bay Rays, beginning on Friday night at 7:10 PM ET.

Related: It’s time for the New York Yankees to move on from Gleyber Torres