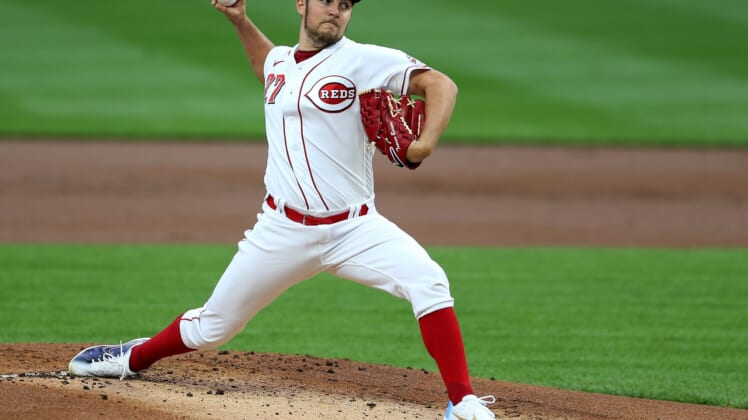 The New York Mets came in second place in a one-winner race for the second time this winter when Trevor Bauer signed with the Dodgers, despite earlier reports and a mysterious signed hat offer that suggested the opposite.

The Mets can win the division without Trevor Bauer and their rotation is still strong.

But with both teams’ offers being nearly equal in monetary value, the Dodgers held the advantage in location, analytical approach and recent track record. The only reason the Dodgers weren’t considered a front-runner for Bauer is because they were already the best team in baseball on paper. And Bauer makes them even better.

The San Diego Padres upped the ante this winter with their multiple ace acquisitions, so maybe it was only a matter of time before the Dodgers responded in kind. Those two teams will duke it out in the west, and that’s not the New York Mets worry.

What is more frustrating from the Mets standpoint is that reports all winter were that Sandy Alderson wanted Trevor Bauer, while Jared Porter preferred to spend money on George Springer before he was fired days before Springer signed with Toronto. Springer, and to a lesser extent JT Realmuto, felt like the real missed opportunities.

Fair or not, Bauer’s signing with the Mets would have also tied his behavior to Mickey Callaway and Porter and put the Mets under even more fire for a perceived cavalier attitude towards women employed in baseball or sports media.

The NY media landscape is unforgiving in general, but that would have put Bauer’s performance under tremendous scrutiny. Even while Bauer is more likely than not to maintain a high level of performance, it’s still easy to see how he carried an extra risk of becoming a distraction or side-show.

Whether or not that same critique now falls on the Dodgers remains to be seen. Bauer is at best a controversial figure among sports writers and for good reason. While his outspoken presence online can be entertaining and informative, he’s also straddled the line between snarky trolling and outright harassment of critics. Twitter and social media seems to both expose and enable bad behavior, although at this point it would probably be extremely difficult for MLB to try and limit players’ usage.

On the field, the Dodgers now have three former Cy Young winners in their rotation in Bauer, Clayton Kershaw and David Price (who is admittedly no longer that caliber of pitcher). The last team with that distinction was the 2014 Detroit Tigers, who also had Price, Justin Verlander and Max Scherzer (and a fourth future Cy Young winner in Rick Porcello).

If anything, the Dodgers rotation is now underrated because of the relative lack of experience of their back end trio of Julio Urias, Tony Gonsolin and Dustin May. But all three of them present tremendous upside that was masked by the limited 2021 season.

On paper, the Dodgers cement their “lead” over the Padres, but based on their moves this winter, both teams are so stacked that it would be easy to see either team winning the division. It would not take more than a key injury or two to balance out relative advantages.

Meanwhile, the New York Mets can limit accusations of Wilpon-era frugality by re-allocating the money they would have used for Bauer into shoring up third base and center field defense; they could also stand to acquire another starting pitcher, and while there is nobody left who can match Bauer on a per-inning basis, there are a handful of high-risk high-reward arms left, including James Paxton and Rich Hill.

While they’ve missed out on some big names, the Mets have taken the critical step this winter to shore up their rotation depth. Mets fans may not be celebrating the additions of Joey Lucchesi or Jordan Yamamoto, but they may as well be Trevor Bauer compared to their recent spot starter options. Think Bauer’s tweets are cringe? Have you seen Walker Lockett’s ERA? No matter what happens between now and April (or May because of COVID), Mets fans don’t have to fear any of these guys taking the mound.

The money earmarked for Trevor Bauer can also be put to use to re-sign key free agents after 2021. The Mets should prioritize long-term deals with Francisco Lindor, who would be the best free agent on the market after this year, and Michael Conforto, who’s been a consistent slugger for the Mets since 2015.

Other names worth keeping an eye on early out include third basemen Kris Bryant, center fielder Starling Marte, and current Mets Marcus Stroman and Noah Syndergaard, both of whom potentially represent the top pitchers on the market next year. The Mets could also pull one over on the Dodgers and go after the legendary Clayton Kershaw, who will only be 34 in 2022. That is, admittedly, unlikely.