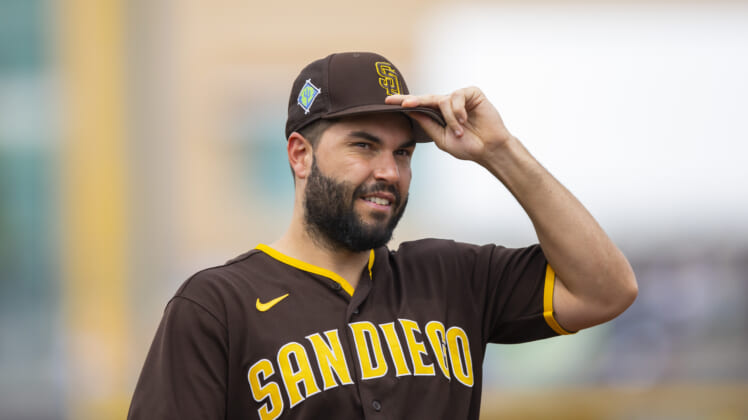 Even before the New York Mets news dropped that Jacob deGrom would be sidelined until at least June with a shoulder injury, the club reportedly engaged in trade discussions with the San Diego Padres to address multiple needs.

According to The Athletic’s Ken Rosenthal and Dennis Lin, San Diego and New York have discussed the parameters of a deal that would send Dominic Smith to the Padres for first baseman Eric Hosmer and right-handed pitcher Chris Paddack.

San Diego has explored its options with Hosmer throughout the offseason, desperate to move on from the remainder of his contract. In order to cut ties with the four-time Gold Glove Award winner, who is owed $59 million over the next four seasons, the Padres have to attach one of their promising arms.

The Padres are engaged in negotiations with multiple teams, per The Athletic. Additionally, the Mets are also exploring their options with interest in adding more pitching and improving defensively at first base.

While adding Paddack would provide depth for a Mets’ rotation that just lost deGrom, it would come at a hefty cost. New York’s payroll is projected at $278 million for the upcoming 2022 MLB season and he is owed $20 million this year.

In short, the Mets would likely exceed a $300 million payroll in 2022 and be pushed into the unprecedented new tier of the Competitive Balance Tax, nicknamed “The Steven Cohen Tax.” While that only impacts Cohen financially, it could impact future Mets roster moves.

The move is more reasonable for San Diego. Shedding Hosmer’s contract would free up payroll, allowing the club to pursue a starting pitcher via trade or clearing room for a pursuit of free-agent outfielder Michael Conforto.

While it would mean trading Paddack, a former top prospect, the young righty might need a change of scenery to turn things around.