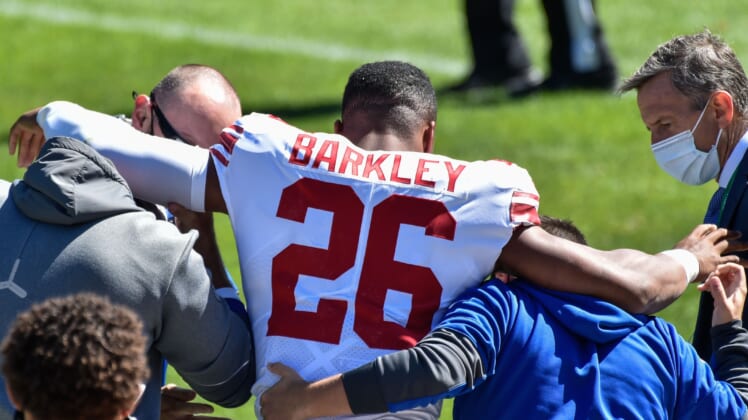 Prior to missing all but two games of the 2020 season, New York Giants running back Saquon Barkley was among the most-electric players at his position in the NFL. It’s one of the reasons why New York shocked the football world and selected the Penn State product No. 2 overall in the 2018 NFL Draft.

Unfortunately, the torn ACL he suffered last September against the Chicago Bears has left everything up in the air. With his 2018 classmates now eligible for extensions, it doesn’t seem like the Giants are going to be doing that any time soon.

“We’re not in any hurry to do that. We fully expect him to be as good as new,” Giants co-owner John Mara told reporters on Wednesday. “We hope he’s going to be a Giant for life. At the appropriate time, we’ll start those discussions.”

Saquon Barkley could very well be a transcendent figure for struggling young Giants quarterback Daniel Jones moving forward. Prior to suffering the above-mentioned ACL injury, the Penn State product had put up 3,469 total yards and 23 touchdowns at a clip of 5.6 yards per touch in his first two NFL seasons.

That included Barkley leading the league with 2,028 total yards en route to winning NFL Offensive Rookie of the Year honors in 2018.

Read More: New York Giants GM has astonishing take on Saquon Barkley and the RB’s future with the team

Why are the New York Giants pushing back against a Saquon Barkley contract extension?

New York’s brass had pretty much the same sentiment as it related to Barkley earlier in the offseason. Even with the running back coming off a serious knee injury, he’s going to be a top-three paid player at that position. It’s possible that the ACL tear could have scared the Giants off some.

As of right now, the fifth-year team option on Barkley’s contract would be $7.22 million. New York figures that it makes sense to see if Barkley can return to form in 2021 before offering a lucrative extension. However, the dynamics change here some should he play at a Pro Bowl level. Earning a second trip to that otherwise meaningless game would make said option for the 2022 season worth roughly $9 million.

One might think the Giants would do everything possible to make sure Barkley is locked up long-term. General manager David Gettleman went against the grain by selecting him over potential franchise quarterbacks. Remember, the likes of Josh Allen and Lamar Jackson went off the board later in the first round.

But it doesn’t seem like this is about saving face. Naturally, the running back market also plays a role here. Christian McCaffrey’s annual average of $16.02 million with the Carolina Panthers set the high-water mark. Ezekiel Elliott of the Dallas Cowboys and New Orleans Saints star Alvin Kamara are both earning $15 million per season.

What does this tell us? The Giants are being smart to wait. There’s no telling if Barkley will return to form after suffering the torn ACL. Why commit that money when they have at least one more calendar year to go before being forced into a decision on a long-term deal?