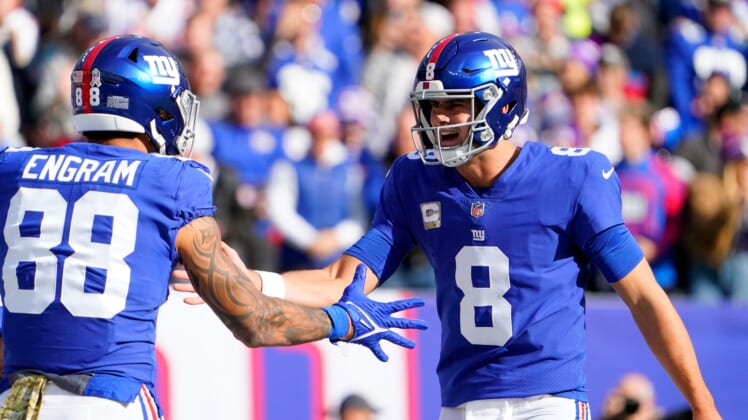 In a game few expected them to win, the New York Giants stepped up and made plays when it mattered most and came away with a 23-16 win over the 5-3 Las Vegas Raiders.

The biggest plays were made by the defense who is slowly but surely regaining their form from last season when they were one of the best in the league.

In the third quarter with the Giants trailing 13-10, safety Xavier McKinney changed the momentum of the game as he intercepted Derek Carr, and ran it back 41 yards a touchdown to put New York ahead 17-13.

McKinney would intercept Carr again late in the fourth quarter on a pass that was intended for Zay Jones. McKinney’s second interception of the game helped set up a 38-yard field goal by Graham Gano to put Big Blue up 23-16 with just over three minutes remaining in the game.

Over the last few years, fans have seen the New York Giants squander leads late in games. But today would be a different story. The Raiders were able to drive the ball to the New York 13-yard line, but Quincy Roche made a game-saving strip-sack on Carr that was recovered by Leonard Williams to seal the win for the Big Blue.

While the defense will receive the bulk of the credit for the win, Devontae Booker had his most effective game running the ball gaining 99 yards on 21 carries.

The Giants passing game took a conservative approach on Sunday. Daniel Jones would throw a 30-yard touchdown to Evan Engram on the first possession of the game. But he finished the afternoon completing 15 out of 20 passes for 110 yards and the one touchdown.

After losing their first three games of the season, New York is now (3-3) over the last six games, and head into their bye week with momentum. Had they lost to the Raiders, there would have been speculations if they would part ways with general manager Dave Gettleman.

Instead, there’s a sense of optimism especially with the possibility of Saquon Barkley returning for the Giants next game on November 22nd against the Tampa Bay Buccaneers.

New York has a long way to go before they can be considered contenders for the playoffs. But Sunday’s win over the Raiders was a much-needed step in the right direction.