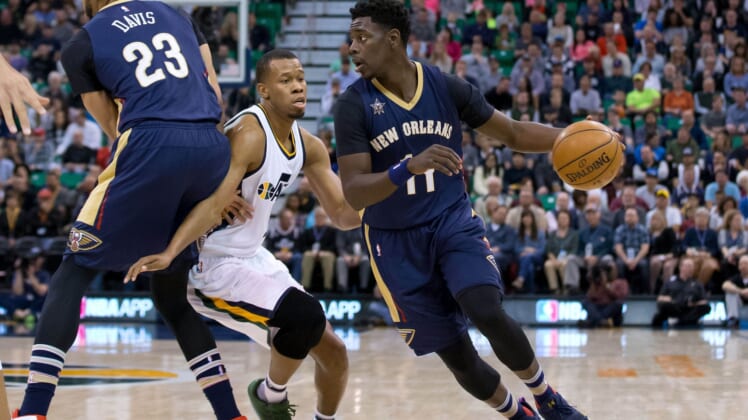 The New Orleans Pelicans rumors are starting to heat up. They have a tremendous young duo in Zion Williamson and Brandon Ingram. They also have a new head coach in Stan Van Gundy and a general manager in that of David Griffin. It has led to rumors that the Pelicans might look to make a major move this winter.

That includes the possibility of Jrue Holiday being traded. Dating back to the NBA trade deadline back in February, rumors have suggested that Holiday is on the trade block. That’s now taken to a whole new level.

According to Marc Stein of The NY Times, the Atlanta Hawks are now engaged in trade talks with New Orleans surrounding Holiday. Said rumor includes the Hawks sending out the sixth pick in the 2020 NBA draft to New Orleans for Holiday.

This is not necessarily that big of a surprise given that the Hawks are looking to deal their first-round pick for a proven player to team up with stud guard Trae Young.

In terms of how a potential trade might look like on this front, both the Hawks ($51.2 million) and Pelicans ($26 million) have cap room. However, a trade would still have to meet the 25% salary threshold. This means that either a third team would have to get involved or Atlanta would have to offer up a combination of Clint Capela and other roster fillers as well as the sixth pick.

Again, rumors have persisted that Holiday could be on the trade block. That’s a given since the Pelicans have an impressive and improve point guard in that of Lonzo Ball. Interestingly enough, rumors surrounding the Pelicans indicate Ball could be moved, too.

Regardless, the Pelicans are going to end up moving on from one of their ball handlers at some point this winter. Right now, an All-Star in that of Holiday seems to be the best. Here’s a look at the likeliest trade scenarios.

There’s obviously a lot of different options as it relates to rumors surrounding the point guard and the Pelicans. Said rumors will pick up sooner rather than later.