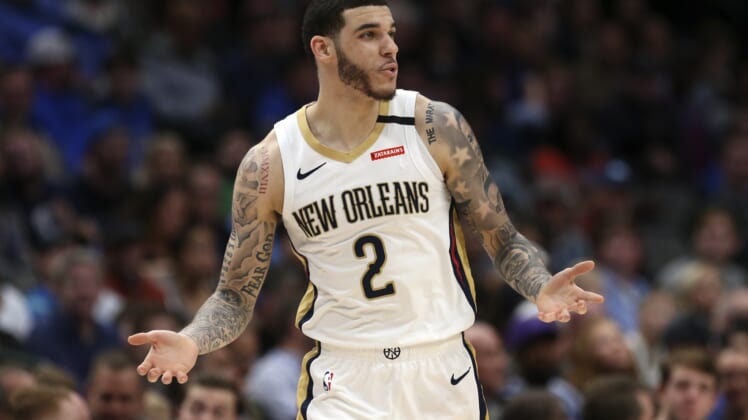 Former Los Angeles Lakers No. 2 overall pick Lonzo Ball was seemingly the headliner in the blockbuster trade that sent Anthony Davis from the New Orleans Pelicans to Southern California ahead of the 2019-20 season.

Despite some inconsistent play in Los Angeles, the 22-year-old Ball seems to have a bright future. He also played exceedingly well with Zion Williamson in limited action this past season.

Although, there’s now a rumor surfacing that the Pelicans could look to move on from Ball.

Could the Pelicans trade Lonzo Ball?

ESPN’s Jay Williams, who has connections within the league, reported recently that Ball could be on the move as the Pelicans look to remake their roster.

This is interesting in that fellow guard Jrue Holiday was the topic of trade speculation leading up to February’s deadline. New Orleans could very well look to keep Holiday while moving Ball instead.

It makes some sense in that the two seem to be ball-dominant guards. Ball averaged 7.0 assists this past season while Holiday put up an average of 6.7 assists. Eight years younger than his teammate and much cheaper as it relates to the finances, Ball might be more attractive to interested teams than Holiday.

What could the Pelicans get in a Ball trade?

That’s the biggest question here. In addition to his seven dimes per game, Ball averaged 11.8 points, 6.1 rebounds and 1.4 steals while shooting 38% from three-point range this past season. He’s also seen as a plus-level defender. That’s no small thing for teams potentially interested in his services.

New Orleans would likely want a first-round pick and a rotational piece in return for Ball. The team could look to move J.J. Redick as a way to make the finances work. After all, Ball is set to count a mere $11 million against the cap. Adding Redick’s $13-plus million cap hit next season, and the Pelicans could potentially bring in someone making about $25 million.

The whole idea is to build around both the above-mentioned Williamson and All-Star forward Brandon Ingram. Big man Jaxson Hayes also showed promise this past season. Moving Ball for a traditional two-guard would make the most sense here.

It’s something to watch this coming fall. That’s for sure.