Denny Hamlin will drive the No. 18 car for Joe Gibbs Racing in this weekend's NASCAR Xfinity Series race at Darlington Raceway. 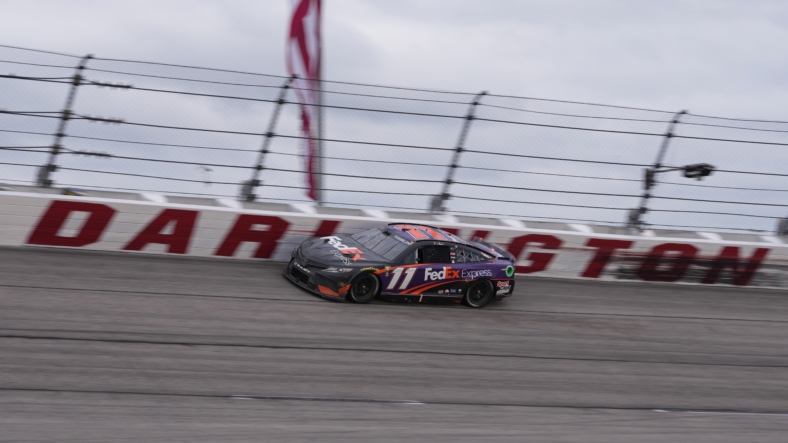 Denny Hamlin will drive the No. 18 car for Joe Gibbs Racing in this weekend’s NASCAR Xfinity Series race at Darlington Raceway. Hamlin, 41, has competed in one race per year in the Xfinity Series since the start of the 2018 season.

The 41-year-old driver will use the extra track time on Saturday to prepare for the first race of the NASCAR Cup Series playoffs, which also happens to be the event he won last season.

The Southern 500 is one of NASCAR’s biggest Crown Jewel events and one that many drivers covet in their trophy cases. Therefore, extra track time will always be positive for drivers looking to secure the best finish possible on Sunday.

Outside of Denny Hamlin, there are at least two notable drivers who will be competing in this weekend’s NASCAR Xfinity Series race at Darlington Raceway.

Ross Chastain will drive the No. 48 car for Big Machine Racing as it is one of a “couple of races” he will compete in the vehicle. It will be the best equipment Chastain has seen in the series this season.

The 29-year-old driver has competed in three events with DGM Racing with one top-5 finish, one top-10 finish, and a 16.3 average finish. Chastain’s best finish over the course of the season is fourth place at the Indianapolis Road Course.

Alongside Hamlin and Chastain, Kyle Larson will pilot the No. 88 car for JR Motorsports in the first Xfinity Series event since his victory at Watkins Glen International just over one week ago.

Larson finished in second place during last season’s Southern 500 behind Hamlin after a failed attempt at a video game-style move in Turn 4 of the final lap when he rode the wall with hopes to pass the No. 11 car

Circling back to Hamlin, it has been a long time since he has entered victory lane in the Xfinity Series. Hamlin won the Fall Darlington event during the 2017 season but is currently on a four-race winless streak.

The first on-track action of the weekend will be at 10:05 a.m. EST on Saturday as the Xfinity Series starts its practice and qualifying sessions from Darlington. Coverage will be on the NBC Sports App.

Later in the day, the Xfinity Series will then tackle the Sport Clips Haircuts VFW Help A Hero 200 at 3:00 p.m. EST on USA Network as the regular season winds down with three races remaining, including Kansas and Bristol.