Evaluating the 3 best landing spots for a Myles Turner trade 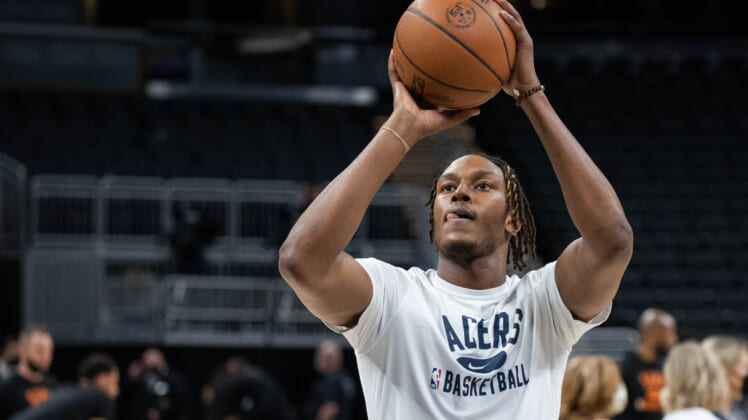 As the Indiana Pacers look towards the future, center Myles Turner finds himself at the center of NBA trade rumors once again. With multiple teams interested in the outstanding big man, a trade before the 2022 NBA season feels inevitable.

Fans in Indiana are ready for changes. Years of seeing the Pacers barely crack the playoffs and witnessing the same warts in Turner’s game every night took a toll. As the front office looks to shake up the roster to create a better core for the years ahead, the fan support is there for a blockbuster trade.

While there are frustrations with Turner, the issues aren’t entirely a reflection on him and instead a matter of how people perceive his style of play. Turner’s game has never been about low-post scoring. It’s been about utilizing his athleticism and shooting, a fact Indiana never seemed to grasp fully. Always asked to make the best out of a poor fit next to Domantas Sabonis, Turner tried to make the best of it.

Now, the Pacers are finally ready to overhaul the roster completely. Sabonis is long gone, netting a franchise guard in Tyrese Haliburton. It’s evident who is next to go and with calls already coming in this summer, let’s evaluate the best landing spots for Myles Turner.

Phoenix is in a delicate position. On one hand, it is two years removed from a trip to the NBA Finals and most recently dominated this past regular season. So, the roster is very talented. On the other hand, the Suns didn’t win the championship then and suffered an ugly playoff exit this year. Wanting to remain a contender and without a timetable for a Kevin Durant outcome, there’s another possibility.

It’s no secret that Deandre Ayton and Phoenix no longer see eye to eye. Ayton wants a max deal and Phoenix isn’t too keen to oblige his wishes. Indiana doesn’t have the same reservations. While losing Ayton is a blow, even if the fan base overlooks it, Turner fills the void.

Related: Myles Turner trade expected this summer, could be used in blockbuster deal

McConnell brings a solid, stable veteran backup point guard to Phoenix. While he’s not on the level of Chris Paul, he can do some similar things while providing an energy boost. With the addition of Turner, Phoenix would get a new element both offensively and defensively.. A shot-blocking big-man who can shoot the three. Paul will still be able to operate his pick and roll and toss up his lobs to Turner. However, when Paul gets into the lane he can also dish it to Turner behind the arc.

The Toronto Raptors have some very nice pieces on the roster, but they could use some size. One of their nice wing players is former IU alumnus OG Anunoby, whose game has blossomed over the last couple of seasons. Unfortunately, Toronto drafted a younger more athletic version of him in Scottie Barnes with Anunoby becoming an expendable asset. If the season started today, the Raptors would either be starting 6-foot-9 Khem Birch, 6-foot-8 Thaddeus Young or the 6-foot-8 Precious Achiuwa at center.

In order to deal Anunoby, the Raptors likely want assurances Turner will sign a contract extension. For now, we’ll go with the optimistic side that he does. With Turner’s addition, Toronto looks like a top-four seed in the East.

For the Pacers, they get the entire IU fanbase outbidding one another for tickets to games. The deal also provides Indiana with an elite wing defender who can guard one through four on the floor. It also takes some extra pressure off of the newest rookie. While Anunoby would be one of the oldest players on the roster, he is still just entering his age-25 season and brings championship experience.

The Golden State Warriors have always stood out as the best landing spot for Turner and now might be as good of a time as ever. Golden State’s big three – Draymond Green, Klay Thompson and Steph Curry – are still good enough to win another title or two. The team is also set up well for a perennial playoff for the next decade thanks to young talent on the roster.

However, Golden State shouldn’t focus too much on tomorrow when it can add to the dynasty. I’m a fan of Wiseman and believe he can be the poster child of the new age big man. However, injuries have really hampered that for him. As previously stated, Golden State can win another championship without him being on the floor. Looney is good for what the team has him do but if they get the chance to upgrade him, they should take it.

Turner joins Golden State to shoot threes, block shots, run the floor for monstrous jams and his defensive abilities increase playing next to Green. Remember when Andrew Bogut was lethal for Golden State’s title? Yeah, Turner can be a variation of that for the Warriors.