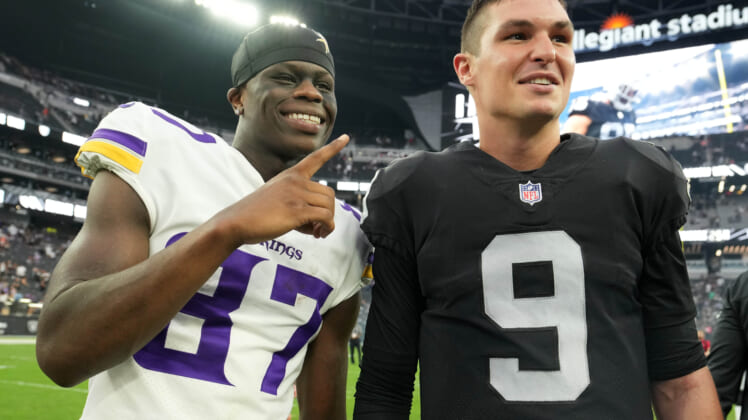 We have another preseason trade in the NFL. The Minnesota Vikings, looking to address their need for a capable backup quarterback, have acquired veteran Nick Mullens from the Las Vegas Raiders in exchange for a conditional seventh-round pick in 2024, according to Tom Pelissero.

Let’s break the trade down, and what the arrival of Mullens means for the other quarterbacks on the Vikings’ roster.

New head coach Kevin O’Connell has finally had a chance to see what he has behind starting QB Kirk Cousins after several training camp practices and two preseason games. Like many other observers watching the Vikings, he didn’t like what he saw.

Veteran Sean Mannion, who ironically comes from the Los Angeles Rams, has looked like the better of the team’s two backups, but he hasn’t exactly run away with the gig. It’s more by default.

Second-year pro and 2021 third-round pick Kellen Mond has displayed his arm talent, but rarely. Mond has mostly drawn attention for some very questionable decisions and throws. At 23, the former Texas A&M star doesn’t look anywhere near ready to operate a high-powered passing attack like the Vikings envision having with Justin Jefferson, Adam Thielen, and Irv Smith Jr.

Clearly coach KO let it be known to general manager Kwesi Adofo-Mensah that the quarterback they inherited from the previous regime aren’t cutting it, so they had to look elsewhere.

Mullens, 27, is entering his fifth NFL season and has spent time with the San Francisco 49ers, Cleveland Browns, and most recently, the Raiders, who the Vikes played in Week 1 of the preseason.

Mullens may not have the raw potential like Mond has, but the Vikings aren’t trading for him for future projections, or to push Mond off the roster. They like his ability to operate an offense right now, instead of the dysfunction we’ve seen from the Minnesota offense through two preseason games.

In his time with the 49ers, Mullens developed from an undrafted rookie to a capable backup who can step in and make a start if needed, as long as it’s not for an extended stretch. He doesn’t have a flashy skill set, but he has displayed toughness in limited action.

The Raiders traded for Jarrett Stidham, reconnecting him with Josh McDaniels from their days with the New England Patriots, so Mullens’ days may have always been numbered in the desert.

Despite having just signed with the Raiders in April, now he’s packing his bags for the Twin Cities, where he’s expected to be the top backup to Captain Kirk, but first he’ll have to learn the offense. Expect to see Mullens get some run in the team’s third preseason game this Saturday.

For the Vikings, giving up a conditional seventh-round pick in 2024 for a quarterback who may end up as their top backup has to be considered a win. Sure, there’s a possibility Mullens just would have been released anyway, but then the Vikes would suddenly be competing with 30 other teams for his services aside from the Raiders and themselves. In this case, they secure their guy for next to nothing. He can’t be worse than Mond or Mannion.