Minnesota Vikings: A look at the 2023 salary cap 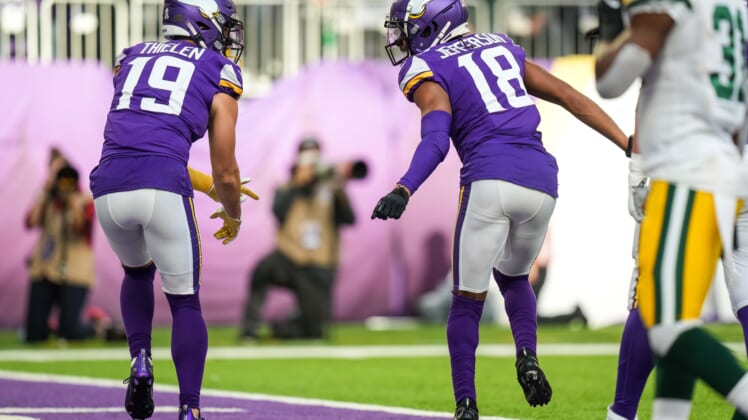 The signing of Za’Darius Smith is great. Having good players is always better than having cap space.

But it does make one wonder how the signing impacts the Vikings’ salary cap situation. Didn’t reports say that the Vikings were right up against the cap? How does a team squeeze $42M out of basically $0 of cap space – and to the point of this investigation, what does that do to the future cap? And most importantly: Has the new leadership crippled the team in future years to make a splash now?

To get a sense of how things stand, I downloaded the salary cap positions from all 32 teams from overthecap.com and spotrac.com (updated through Tyreek Hill trade) . Spotrac and Over The Cap add things up a little differently, so you can find a few minor discrepancies, but the overall trends are the same on both.

Before we dive into the Vikings’ cap situation, I’ll share a few of my assumptions on what I’d like to see:

Well, sort of, but not necessarily. Yes, more cap space means more flexibility, but going back to the first paragraph: I’d rather have good players than loads of cap space. The reality of the NFL is that good players are hard to find, yet, good players typically make the most money. For an analysis list that starts with 2023, it’s a bit strange to think that in March 2022, the start of the 2023 season isn’t that far away; a team really only has one free agency period (2023) and two drafts to find enough good players to fill out its roster.

So is this just going to be a ranking of teams with the most cap space?

Over The Cap – cap space by team

It’s a nice picture, but this isn’t the really interesting part. To understand where the Vikings are, there are two very different components that make up this number:

Money that will be paid to players in 2023 – This is the medical equivalent of good cholesterol (you need it to live). Money paid to players gets good players on your team. Teams can get this cap space back if they trade a player or release them (if the salary is non-guaranteed). This can also be deferred into future years (more on this later).

Prorated bonus dollars – The bad cholesterol of the salary cap (it seemed delicious at the time, but can cause problems). This is from money that was paid to players in previous years and spread over the life of the contract. There is no way to avoid it and no way to reduce it; it can even go up if a player is cut. It’s nice if this is lower, but what are you going to do? Avoid the pizza and cheesecake when you visit New York? Not sign Za’Darius Smith? Of course not! Teams that are living life to the fullest will have some of this money. Some of it is also not bad because it means the team is playing for now and later.

So what we want to see is…

A team that has:

– a good amount of cash scheduled to be paid to players; too low and it means they have to find an entire team by next year

– as low a number as possible for that prorated bonus value

Health check on the Minnesota Vikings:

The Vikings have ~$199M spent against the cap broken down:

So $47M/$199M is prorated bonus dollars, or about 23%. The higher this percentage, the less flexibility a team has with its future roster.

As you look at this chart, think about it this way:

How do the Vikings stack up?

Really well, actually. They are down on the quadrant that is most set up for success. They have money set to be spend on guys on the roster. Compared to other teams, they have pushed relatively less bonus money into future years, so they still have flexibility. With this, we can now dive a little deeper into two important comparisons: How much space do the Vikings really have? And, how does their roster compare to some of the teams on the chart?

How much space do the Vikings really have?

Right now the Vikings look good sitting with $46.6M of bonus money in 2023. If they do the same thing next year, they can push a minimum of $10M forward into 2024, and probably about the same amount into 2025 and still be in great shape. That would clear an additional $20M of cap space in 2023 while causing very little future pain. So as of now, think of the Vikings as having ~$45-50M in usable space for 2023. That’s with a $14M hit of Za’Darius Smith already taken into account and a full-priced Kirk Cousins. That is plenty of flexibility to add pieces and give Danielle Hunter and Irv Smith Jr. a lot of extra money.

Now a look at what the 2023 Minnesota Vikings have going for them:

The good: There is money to be paid to guys that should be core contributors: Kirk Cousins, Brian O’Neill, Danielle Hunter, Dalvin Cook, and Justin Jefferson.

The “just okay”: Some older guys have pretty big base salaries (Adam Thielen, Harrison Smith, and Eric Kendricks). Big base salaries are better than big bonus charges, because that means there are options. So big numbers for guys on the decline aren’t great, but there are at least choices to be made. There is also a big bonus/dead cap bogey sitting out there for Dalvin Tomlinson that could be fixed with an extension (that I, personally, would be in favor of).

Comparisons to other teams

It is most useful to compare the Minnesota Vikings’ situation to some of the other interesting situations on the chart. For this comparison, it is important to know how many players teams have signed through 2023. Here is a look at total players under contract and guys getting paid more than $1.5M actual money. ($1.5M was picked because that cuts out veteran minimum and low-level rookie deals). Here is how many players teams have signed:

Indianapolis Colts: Starting with a great cap situation, the Colts are like the Vikings in that they have a veteran quarterback on the roster (Matt Ryan), and several core guys under contract (Darius Leonard, Braden Smith, and Grover Stewart). And they have hardly any sunk-cost bonuses sitting out there. The Vikings are in decent shape, but if you can’t help yourself and simply have to be jealous of another team’s salary cap situation, the Colts are a good choice.

Chicago Bears: The Bears are spending most of their 2023 money on Robert Quinn (he’s fine, but not great), Cody Whitehair (who?), and Eddie Jackson (that’s bad). Their fourth-highest cap hit in 2023 is Justin Fields’ rookie contract. Remember how earlier it was said that “too much free cap space is a bad thing?” This is a perfect example. Robert Quinn, Cody Whitehair, and Eddie Jackson are not the veteran core of a quality (or even serviceable) NFL team.

New Orleans Saints: Here I thought the Saints would be out of cap hell by now with all of their recent cap pain. That’s not the case at all. The core Saints that we know (Jameis Winston, Michael Thomas, Marshon Lattimore, and Cameron Jordan) will be back, but with $84M already sunk, they have very little wiggle room.

Green Bay Packers: Not so bad, sure, but they are locked in to their spending with a relatively large chunk ($69.5M) of immovable money. But they’re not too far to the right of the chart, so they have free space, and a core of Aaron Rodgers, David Bakhtiari, Kenny Clark, Aaron Jones, Preston Smith, and De’Vondre Campbell will be pretty good with $60M of free space, right? Wrong. Rodgers isn’t counted as one of the players earning more than $1.5M in 2023 because Over The Cap isn’t showing the $58,300,000 player option Rodgers can exercise in 2023. That’s not even the rest of his contract; that’s just 2023. He can exercise another $47,000,000 in 2024. Even if those are spread out over a few years, those are massive shoes waiting to drop on this seemingly “okay” number. He could also retire and blast a dead cap hole in the Packers’ budget.

Even after spending on Za’Darius Smith and pushing out Danielle Hunter’s bonus, the Minnesota Vikings are in pretty good shape for the salary cap in 2023. They have some bumps in the road, but those are manageable and generally less than most of their competitors.

To answer the critical question: Has the new leadership crippled the team in future years to make a splash now? No. The team is set up very well to keep guys like Hunter, Justin Jefferson, Christian Darrisaw, and Cameron Dantzler, regardless of what happens at quarterback.

If you enjoyed this piece, please consider hopping over to Purple Pain Forums and debating with other Minnesota Vikings fans about not only this topic, but so much more!