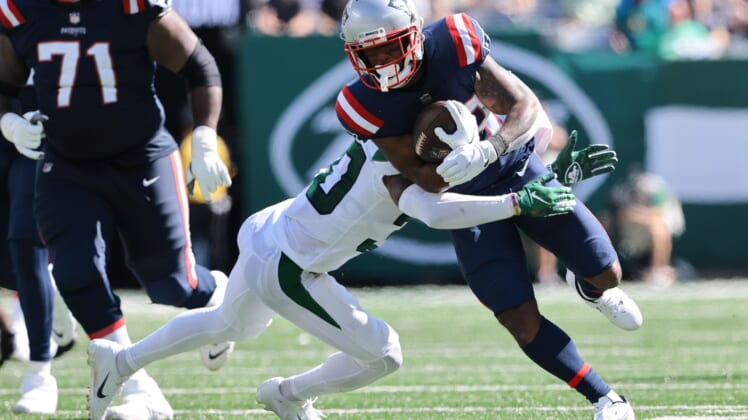 Mac Jones and the Patriots prevailed in a battle of highly touted rookie quarterbacks as New England earned a 25-6 win over Zach Wilson and the host New York Jets on Sunday afternoon in East Rutherford, N.J.

Jones, the No. 15 overall pick in this year’s draft, completed 22-of-30 passes for 186 yards en route to his first NFL victory. Damien Harris rushed for 62 yards and a touchdown and James White also had a rushing TD for New England (2-0), which bounced back from a season-opening 17-16 home loss to Miami.

No. 2 overall pick Wilson was intercepted four times and threw for 210 yards on 19-of-33 passing for the Jets. Wilson has thrown five picks in his first two NFL games after tossing one interception in the Jets’ 19-14 loss at Carolina last Sunday.

Nick Folk made all four of his field goal attempts for New England, eclipsing Stephen Gostkowski’s franchise record with his 32nd consecutive made field goal from 32 yards on his third of four attempts to make it 22-3 late in the third quarter.

Two plays after Wilson’s fourth pick of the game early in the third quarter, Harris carried four Jets defenders on his back while powering in for a 26-yard touchdown to put the Patriots ahead 19-3.

Wilson’s first two pass attempts were intercepted and he completed just 3-of-7 passes along with a trio of picks as New England built a 13-3 halftime lead. He is the first player since at least 1991 to be picked off on his first two attempts of the game, per NFL Research.

The first of two J.C. Jackson first-half interceptions set the Patriots up on the Jets’ 35 yard line before Nick Folk kicked a 46-yard field goal to put New England up 3-0 with 4:46 remaining in the first quarter. White’s seven-yard touchdown run with just over a minute to play in the quarter made it 10-0.

Matt Ammendola’s 21-yard field goal capped New York’s longest drive of the opening half at 59 yards to make it 10-3 with 9:52 left in the second quarter. Folk added a 49-yarder as time expired in the first half, matching Gostkowski’s team record.