Here’s a look at PFF’s top 10 prospects, as Stingley checks in as the top-rated player who doesn’t play the quarterback position.

No surprise to see Oklahoma quarterback Spencer Rattler leading the way. After all, quarterbacks play the most important position on the field, and not to say Rattler doesn’t deserve the top spot, but Stingley is more accomplished and just as talented at what he does on the gridiron.

In any event, Stingley is held in such high esteem. Even as a true freshman on a loaded Tigers team that won the national championship, Stingley managed to stand out as a first-team all-SEC selection and All-American. He earned all-conference honors once again as a sophomore.

It’s no wonder Stingley was able to fast-track his path to being an impact player. Going against future first-round draft picks in Justin Jefferson and Ja’Marr Chase definitely pushed Stingley to be better, and to his credit, he’s establishing himself as one of the most hyped-up cornerback prospects in NFL Draft history. 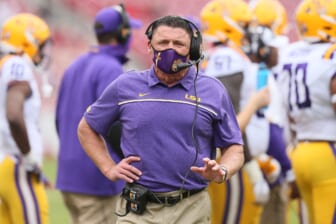 In our latest NFL Mock Draft, Stingley goes No. 3 overall to the Cincinnati Bengals. The assumption here is that the Houston Texans and Detroit Lions go with Rattler and Sam Howell respectively, and Cincinnati continues to pull from that aforementioned 2019 national title-winning LSU team.

If things don’t go the Bengals’ way in 2021 — we’re predicting Cincinnati to have a 4-13 record, with many apologies to ex-Tigers Heisman Trophy winner Joe Burrow — they could actually have quite a reunion party going on.

Former LSU assistant Joe Brady, now of the Carolina Panthers, could easily be next in line as Cincinnati’s new head coach if Zac Taylor doesn’t meet expectations. Brady’s connection with Burrow holds weight. Then, you’ve got Chase and Stingley as fellow products of that powerhouse program in Baton Rouge.

If QB-needy teams aren’t at the top of the draft, there’s an outside chance Stingley goes No. 1 overall. That’s the type of talent we’re talking about here.

Stingley is so good that even a team who was offered a king’s ransom from someone who desperately wanted to draft a QB would have to consider passing that up in his favor. The 20-year-old prodigy also has the production to back up his elite physical tools already. His six interceptions as a true freshman did plenty to deter opposing passers from challenging him much at all in 2020.

Barring something unforeseen, Stingley is a lock to be a top-five selection at the very least. It’s just a matter of how the NFL standings shape up during the 2021 season. We might even see teams who want a lockdown corner trying to trade up higher in the draft for him.

Usually, draft day trades to move up in Round 1 are reserved for QBs. Stingley merits that type of consideration as someone who can lock down an entire half of the field with his elite coverage ability.