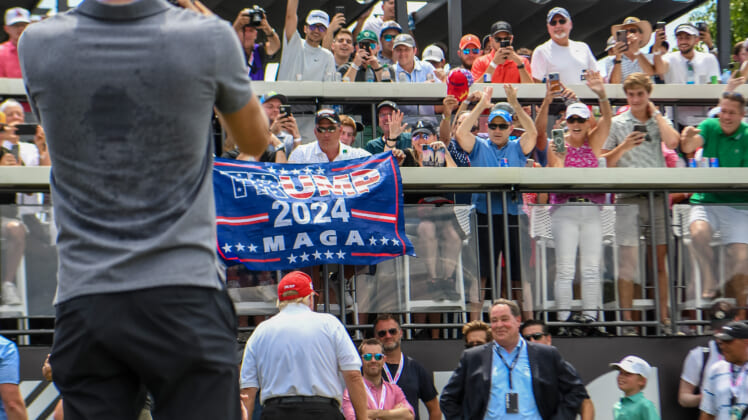 LIV Golf has been a major talking point around the sports world since the start-up tour got going in England back on June 9.

The Saudi-backed alternative to the PGA has poached a ton of big-name players in recent months with its big-money backing and lavish ways.

The third tournament on the LIV schedule started Friday from the Tump National Golf Course in Bedminster, New Jersey. There’s obviously a political backdrop with the former president hosting the tournament, adding to the divisive nature of LIV Golf.

As the weekend continued in Jersey, it became clear that golf fans were remaining away from Bedminster. How much so? According to The Wall Street Journal, tickets for the event were going for as little as $1 on the second-hand market.

It was on Friday that Phil Mickelson was heckeld by a fan in New Jersey. “Do it for the Saudi Royal Family,” said fan told the multi-time Major winner as he teed off. Mickelson was forced to back away from the tee as security in Bedminster threatened to kick the fan out.

There’s been a growing disconnect between the big-name players that have left the PGA for LIV Golf and others around the sports world. Hosting a tournament mere miles from the site of the 9/11 terrorist attacks didn’t sit well for many.

It’s a continuation of the troubles LIV Golf has had from a broader perspective despite the fact that it is being backed by the Saudi Royal Family.

All of this comes at a time when some of the biggest names on the PGA Tour have defected to LIV. That list includes, but isn’t limited to Mickelson, Bubba Watson, Bryson DeChambeau, Brooks Koepka and Dustin Johnson.

As for the former president’s involvement at this weekend’s LIV Golf tournament, it’s safe to say that the microscope was placed on the start-up in a big way.