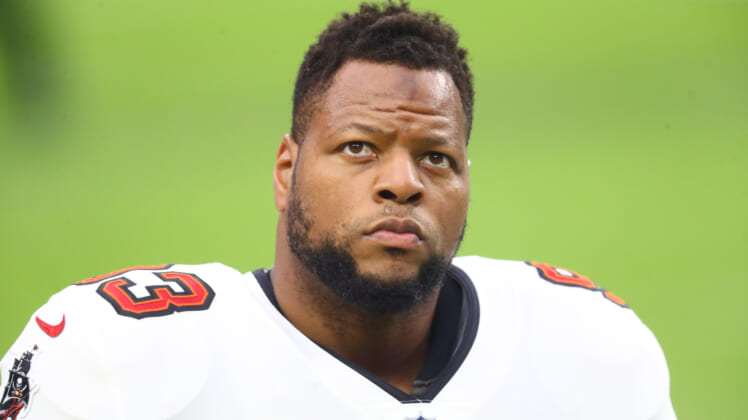 The Las Vegas Raiders will get an additional $19.75 million in cap space for their post-June 1 cuts. They used the designation to release Cory Littleton ($11.75 million) and Carl Nassib ($8 million). Now, what should the Raiders do with the added financial resources?

While they could use some of it to give tight end Darren Waller and/or wide receiver Hunter Renfrow pay raises, general manager Dave Ziegler should examine the free-agent market for veterans who can fill some holes before training camp starts late in July.

Vegas should target a veteran tackle to compete with Alex Leatherwood and Brandon Parker. The club may consider a proven defensive lineman to mix with a pair of rookies in Neil Farrell Jr. (fourth round) and Matthew Butler (fifth round). The front office can add some competition to the second and third levels of the defense as well.

Yes, Jackrabbit Jenkins prefers that first name over Janoris, and he’s coming off a down year with the Tennessee Titans (giving up six touchdowns in coverage) at 33 years old. Now that we have those facts out of the way, the Raiders should consider Jenkins for two reasons.

For one, he’s a scheme fit who’s comfortable in man coverage. Secondly, the savvy veteran isn’t afraid to gamble and jump routes to make big plays. Sure, sometimes that gets him in trouble, but Vegas has struggled to force turnovers over the past few seasons:

A decent cornerback can break up a pass and get the defense off the field on third down, but a risk-taker can flip the field, giving an offense good field position and more possessions. Since 2019, Jenkins has recorded nine interceptions. He could push Rock Ya-Sin for a spot on the boundary opposite Trayvon Mullen.

Between 2016 and 2017, Jenkins played for the New York Giants while Patrick Graham served as the team’s defensive line coach, so they’re somewhat familiar with each other.

If Alex Leatherwood moves back to right tackle, Vegas should sign a reliable veteran for the swing tackle spot because Brandon Parker isn’t a trustworthy pass-protector. He allowed the second-most quarterback pressures (53) among Raiders offensive linemen in 2021, per Pro Football Focus.

In the event that Leatherwood continues to line up at guard, Solder can push for the vacancy at right tackle as a placeholder at the position. That’s not an ideal situation, but he could be a better option than Leatherwood and Parker for a year. 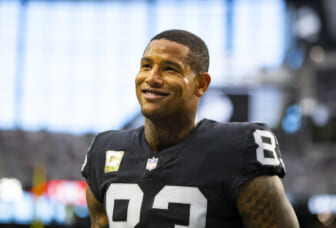 Solder has experience on both sides of the offensive line, and he’s played under Josh McDaniels during his tenure with the New England Patriots between 2012 and 2017. The 10th-year pro would become an alternative option at a premium position in case Leatherwood and Parker show little improvement through the summer.

Solder ranks higher than Jenkins because the Raiders have a questionable starter and low-quality depth at right tackle.

This is an under-the-radar pickup that makes sense because of the turnover at inside linebacker.

The Raiders didn’t re-sign Nicholas Morrow, and they released Littleton as well as Nick Kwiatkoski. Though the club signed Jayon Brown, who will likely challenge second-year pro Divine Deablo for the starting spot alongside Denzel Perryman, Vegas can add to the competition.

Alexander Johnson has more career starts (34) than Micah Kiser (11) and Kenny Young (25), who will most likely compete for backup roles. 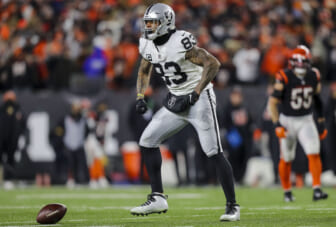 Over the last three seasons, Alexander has recorded 249 tackles, 11 for loss, 4.5 sacks, eight pass breakups, and an interception through 37 games (34 starts). Last season, the Denver Broncos placed him on injured reserve after he tore his pectoral muscle in Week 6.

With two seasons worth of starting experience in odd-man fronts, Johnson could push Brown and Deablo for a starting role or provide quality depth in case Perryman has issues staying healthy as he did early in his career. Johnson ranks third over Solder because he’s still in the prime of his career.

General manager Dave Ziegler would likely have to spend a premium to sign Ndamukong Suh, but even at 35 years old, he’s still worth it.

Over the past three seasons, Suh recorded 112 tackles, 23 for loss, 14.5 sacks, and 72 pressures with the Tampa Bay Buccaneers, and he played in every game while on the field for at least 63 percent of the defensive snaps for each campaign.

Related: Las Vegas Raiders schedule – Projections and analysis for the 2022 slate of matchups

Vegas only has two players on the defensive line primed for big roles in nose tackle Johnathan Hankins and defensive end Bilal Nichols, who signed a two-year, $11 million deal ($7.1 million guaranteed). Suh could balance that pair with his ability to play on all three downs. He’s a stout run defender who can still consistently push the pocket.

Suh takes the No. 2 spot over Johnson because he would undoubtedly start at his position.

As of right now, Leatherwood and Parker seem like the top competitors for the starting job at right tackle, which is a risky gamble. Last year, they gave up 121 pressures and committed 26 penalties combined, per Pro Football Focus.

Parker’s pass-protection issues and infractions raise major concerns because he’s going into his fifth year. Heading into his second season, Leatherwood has a lot of room for growth.

Yet Ziegler shouldn’t pass up a chance to strengthen quarterback Derek Carr’s pass protection at a bargain price. At this point in the offseason, Williams isn’t going to cost the Raiders an eight-figure salary on a short-term deal. Furthermore, he has notable experience at right tackle and right guard, which would complement Leatherwood, who’s vying for a starting spot at the same positions. 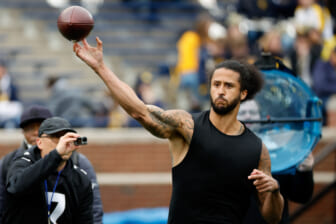 Williams tops the list over Suh because the Raiders need a starting-caliber right tackle, which is a premium position. Whereas Suh would play at a non-premium position in a rotational role.