Fans often wrestle with personal feelings for their teams and what’s best for a chance to win in fantasy football leagues. In 2022, managers who are fond of the Las Vegas Raiders can target five players and not feel like an allegiance to the team compromised their draft choices.

The Raiders will have one of the better pass-catching groups across the league, which will also elevate the quarterback position and perhaps open up lanes for the ground attack.

The Silver and Black should field a top-10 scoring offense under new head coach and play-caller Josh McDaniels with plenty of fantasy points to go around.

Let’s break down and rank the Raiders’ top-five fantasy football options with a projection on where they rank among players at their positions for point-per-reception leagues.

The Raiders traded wide receiver Bryan Edwards to the Atlanta Falcons, so many of you may think Hunter Renfrow will soak up more targets compared to his total last year (128).

However, Renfrow isn’t likely to rank within the top 20 in targets as he did in 2021. With a healthy Darren Waller, who missed six games last year, and Davante Adams in the mix, Renfrow will probably rank third on his own team in targets. 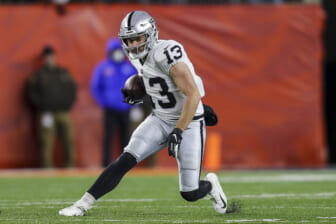 Down the stretch last season, Renfrow lined up as the Raiders’ go-to receiver with Waller on the sideline and Henry Ruggs III no longer on the team. He’s not going to command a steady high volume of looks with a full-strength pass-catching group that includes a top wide receiver and tight end.

Renfrow is a solid WR3 in 12-team PPR leagues.

Derek Carr probably doesn’t care about this, but he hasn’t been a fantasy-friendly quarterback, throwing for more than 28 passing touchdowns in just one season way back in 2015. On the flip side, he’ll play with the best pass-catching group in his career.

Carr should eclipse 30 passing touchdowns with Adams, Waller and Renfrow as his top targets. Also note that despite a depleted group of pass-catchers last season, he threw for 4,804 yards. Even if you remove his four overtime games from the equation, he still averaged 263.4 passing yards per game, which would’ve been a career-high.

Carr won’t crack the top 10 among fantasy quarterbacks because he’s not going to provide much in rushing production, but he could easily throw for another 4,800-plus yards and top his career-high 32 passing touchdowns with Adams in the fold for the Silver and Black.

Carr is a potential sleeper for managers who prefer to wait until the late rounds to pick up a quarterback.

The New England Patriots had just two 1,000-plus-yard rushers with McDaniels as their offensive coordinator, LeGarrette Blount in 2016 and Stevan Ridley in 2012. The running backs averaged 18.7 and 18.1 rush attempts per game, respectively, in those seasons.

Last year, Jacobs averaged 14.5 carries per game and finished with 872 rushing yards and nine touchdowns through 15 outings. He may log similar numbers in the upcoming campaign.

McDaniels will have a crowded running back room. The Raiders brought in pass-catching tailback Brandon Bolden over from the Patriots and drafted Zamir White (fourth round) and Brittain Brown (seventh round). They’ll join Jacobs and Kenyan Drake.

Jacobs will likely share carries with Drake and possibly White. The former may lead the running back group in catches and receiving yards.

Jacobs is more valuable in non-PPR leagues. He’s a low-end RB2 in a PPR scoring format. He’ll lead the team in carries with about 15 rush attempts per game, but don’t expect him to catch a lot of passes with Drake and Bolden on the roster.

In the fantasy football realm, average running backs have more value than quarterbacks outside the top 10, so Jacobs ranks one spot above Carr.

Waller had 90-plus receptions and 1,145-plus receiving yards for the 2019 and 2020 seasons. If he stays healthy, the Pro Bowl tight end could match or come close to those numbers in a pass-heavy offense with Adams commanding double coverage consistently.

Earlier in the week, Waller said he’s watched a lot of tight end Rob Gronkowski to prepare for his role in McDaniels’ offense.

“It’s asking me to do a lot of things. We’ve watched a lot of tape of Rob Gronkowski running wild from just old New England clips and stuff like that. So it’s exciting to see different ways that I’ll be used. And, yeah, I’m very excited about it.”

Las Vegas Raiders tight end Darren Waller on his role in the 2022 offense, via USA Today

Waller isn’t a top-three fantasy tight end because he has to share targets with one of the league’s best wide receivers in Adams, but the 6’6″, 255-pounder should still see plenty of looks in the aerial attack. At times, Waller will be the No. 1 pass-catching option.

As a top-five player at his position, Waller ranks higher than Jacobs, who’s a middling fantasy running back.

No surprise with Adams in the No. 1 spot. He’s going to be Carr’s No. 1 target on most plays. The Raiders signed him to a five-year, $140 million extension to feature him in an offense with his former Fresno State teammate under center.

Back in April, Carr shared what he told his brothers about what it felt like throwing to Adams again.

Adams will boost Carr’s fantasy profile while maintaining a high spot in the drafts. He’s still a top-five wide receiver, though the two-time All-Pro will play with a more talented group of pass-catchers than the unit in Green Bay.

Waller and Renfrow will impact Adams’ production a bit, but he’s a first-round fantasy draft pick because of his playmaking ability, especially in the red zone, and his established rapport with Carr.

If you had to place a bet on who will lead the Raiders in catches, receiving yards and touchdowns, go with Adams, which is why he’s in the top spot over Waller.