Johnny Davis had a banger of a sophomore season with the Wisconsin Badgers. Davis showcased the ability to be a leading scorer in frequently attacking the rack and getting to the free throw line. He also played stiff defense and hit the boards at a high clip for a guard.

Davis is a two-way player who can get his own through physicality on the offensive end. It’s a matter of him developing a smoother jump shot at the next level.

Here are three ideal destinations for Davis relative to where teams are selecting.

3. Johnny Davis to the Washington Wizards

The Wizards don’t have a clear-cut route with the No. 10 pick. One viable option is selecting Davis, as he fits whatever direction the franchise goes with Bradley Beal this offseason.

If Beal bolts, the Wizards have their day one shooting guard in Davis. He would serve as an off-the-ball scorer who strengthens their play on the other end of the floor. Furthermore, Davis would be able to play off Washington’s frontcourt depth, as the likes of Kristaps Porzingis, Kyle Kuzma and Rui Hachimura are legitimate scoring options.

In the scenario that Beal stays put, Davis would be a leading scorer off the Wizards’ bench, potentially earning his way on the floor at the end of games. One way or another, Davis gives the Wizards a reliable player who can make a difference in head coach Wes Unseld Jr.’s rotation. He adds another starting-caliber player to a team of former lottery selections.

All that said, they may prefer to draft based on need (point guard?), as recent reports state that Beal is leaning towards re-signing with the Wizards.

2. Johnny Davis to the Detroit Pistons

The Pistons need another go-to scoring option. In a perfect world, that player would complement former No. 1 pick Cade Cunningham. Davis fits the bill.

The young backcourt would lead the way for the Pistons alongside budding forward Saddiq Bey, who has continually improved as a scorer, and big man Isaiah Stewart. Davis should be able to build on his 2021-22 success with the Pistons, as he’s presumably their starting shooting guard. He adds more impactful depth to a young team in search of stability and defensive smarts.

The factor that could stop the Pistons from selecting Davis, though, is them preferring to add a more electric scorer, as the former Badger has a shaky jump shot.

1. Johnny Davis to the Indiana Pacers

The Pacers can go a handful of ways with the No. 6 pick. With that said, Davis would be a plausible selection and fit in head coach Rick Carlisle’s rotation.

Tyrese Haliburton and Chris Duarte are the featured part of the Pacers’ retooling effort, as both players are efficient perimeter shooters and still in the raw stages of their respective NBA careers. Having a contrasting skill set out on the wing would give Indiana a tantalizing perimeter attack.

With Haliburton and Duarte attracting defensive attention and stretching the floor, Davis will be able to attack the rack and get to the line. In other words, he can play to his strengths while beefing up a transitioning team on the defensive end. They’d have more balance in their starting five and complementary offensive focal points. Meanwhile, the Pacers have compelling big men Jalen Smith and Isaiah Jackson and veterans (Malcolm Brogdon, Myles Turner and Buddy Hield) who could be traded for more young pieces.

Davis and the Pacers are a match. The young guard hits the ground running, becoming an integral part of their operation. There’s minimal bust potential with this pick. 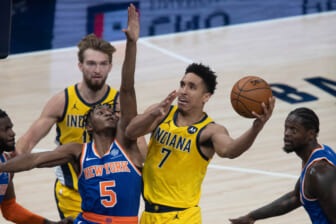