The Miami Heat set themselves up Sunday to pull off a Kyle Lowry sign-and-trade with the Toronto Raptors by picking up the $19.4 million option on Goran Dragic’s contract.

The idea here would be to package Dragic and other assets to Toronto for a six-time guard in Lowry that the Heat have been targeting for the past seven years. You read that right. Seven years!

According to ESPN’s Adrian Wojnarowski, Miami has positioned itself to be front runners for Lowry.

“The Miami Heat are positioning themselves to become front-runners to land Kyle Lowry in a sign-and-trade agreement once discussions are permitted to begin with the opening of NBA free agency on Monday” Woj reported Sunday evening.

The NBA insider went on to note that Lowry has been “intrigued” with the idea of joining Jimmy Butler in South Beach. And in an interesting turn, the Raptors might be able to flip Dragic to the Dallas Mavericks or New Orleans Pelicans for more assets — pretty much making this a three-team deal.

As for other compensation Toronto would receive from the Miami Heat, Wojnarowski has some real details. That would include impressive 2020 first-round pick Precious Achiuwa.

How would a Kyle Lowry three-team trade to the Miami Heat look?

First off, it’s important to note that Toronto doesn’t have a need at point guard with holdover Fred VanVleet manning that position and an impressive youngster in Malachi Flynn backing him up. Hence, why front office head Masai Ujiri is looking to get another team involved.

The inclusion of Achiuwa to Toronto in this report is also interesting in that Toronto selected fellow forward Scottie Barnes fourth overall in the 2021 NBA Draft last week. 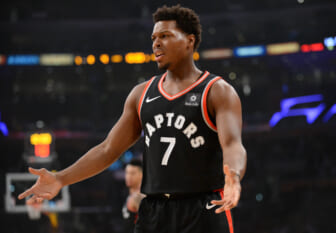 With Pascal Siakam already in the frontcourt, some might wonder what this would mean for his future in Toronto. The star forward has been bandied about in trade talks for some time now. Either way, it would make sense for the Mavericks to acquire Dragic in a “separate” trade.

“Dragic has been a longtime mentor to Mavericks star Luka Doncic, both natives of Slovenia. They also share an agent, Bill Duffy of BDA Sports,” Woj noted in his bombshell report.

As for the Miami Heat and Kyle Lowry, they have been linked together dating all the way back to 2014. It seems to be a marriage made in heaven. A trade of this ilk also wouldn’t force Miami to part ways with Tyler Herro. He could man the two-guard position next to Lowry with Jimmy Buckets at the three. That’s a nice perimeter trio right there.