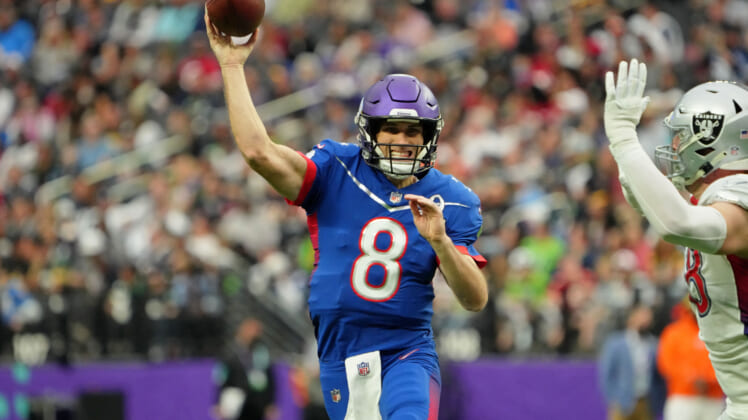 With everyone wondering what’s going on with the Minnesota Vikings and Kirk Cousins, we now have our answer. New general manager Kwesi Adofo-Mensah wants to pair Cousins with his new head coach, Kevin O’Connell for the next two seasons. Mike McCartney, the agent for Cousins announced a one-year extension that keeps Cousins in the Twin Cities through the 2023 football season.

What does this contract extension mean for Kirk Cousins?

For the Vikings, they reduce the $45 million cap number Cousins was set to account for, which would have been the largest amount in football for the 2022 season and the highest salary in NFL history for one season. It’s obvious the Vikings didn’t want that, and with the pressure that comes from being the highest-paid, it’s likely Cousins didn’t want that either.

Instead, Cousins gets a one-year extension that lowers his 2022 cap number, helping the Vikings in the process. Now they have a bit more money to spend as they aim to compete right away.

Like all contracts that Cousins signs, the deal is fully guaranteed. Cousins is set to earn $35 million in 2023.

For his 2022 salary, the Vikings sweetened the deal, perhaps in order to get Cousins to agree, since it helps create more financial space to work with as they negotiate with several other players over the course of the offseason.

Cousins himself is quite excited, yet thrilled to be done with the business side of football, for now.

Are you a Vikings fan? Join the discussion over at the Purple Pain forums

What does the extension mean for the Minnesota Vikings?

Interestingly enough, Cousins also was able to tack on a no-trade clause that he originally had in the very first contract he signed with the Vikings in 2018. This allows Cousins to have much more control over his future, instead of being bandied about in trade rumors for the next two seasons. As he’s stated, he wants to retire a Viking, so this clause gives him the opportunity to do just that.

The Vikings also added two voidable years to the back end of the contract. These void years help lower his cap number down from $45 million down to $31.25 million in 2022.

There were teams who inquired about trading for Cousins in recent weeks, but the Vikings didn’t bite.

All along the Vikings have said they were committed to Cousins going forward. With the ties to O’Connell, it only makes sense that they’d want to see what their connection can lead to. After all, O’Connell’s coming off a special season in which Matthew Stafford brought home a Super Bowl in his first year with the team. Who knows what Kirk Cousins has in store in 2022?

What’s next for Minnesota Vikings after Kirk Cousins extension?

While we don’t have their specific financials for the 2022 season just yet, the next big move the team is likely to make is a contract restructure for star pass-rusher Danielle Hunter. Hunter is due an $18.5 million roster bonus on March 20. The Vikings are likely to address that before then, also lowering his 2022 cap number.

But that’s only the beginning. They have a lot of needs to address on the defensive side of the ball, specifically in the secondary before the 2022 season can start.