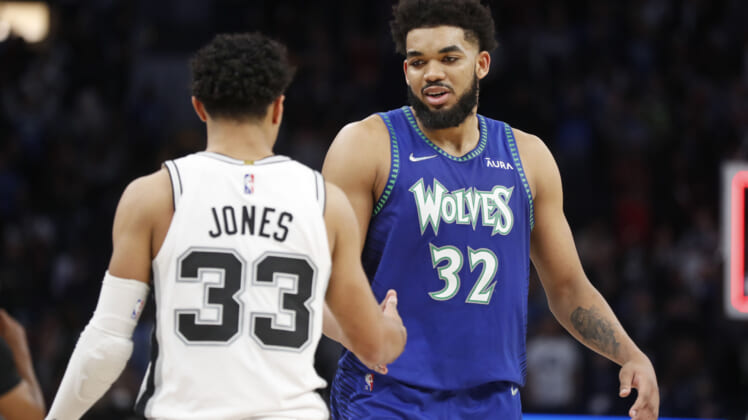 It’s also going to have a major impact on his contract situation moving forward. By virtue of earning these honors, Towns is now eligible for a four-year, $211 million super-max extension from the Timberwolves.

Towns’ contract runs through the 2023-24 season. This means he has two more years at nearly $70 million on his current deal.

Minnesota just hired Tim Connelly to be its next president of baksetball operations. Said deal came via a record-breaking five-year, $40 million contract which includes ownership equity. Connelly will now have control over the roster, potentially leading to some major changes this summer and moving into the future.

Will the Minnesota Timberwolves sign Karl-Anthony Towns to a contract extension?

It’s an open question right now. It also has a lot to do with the finances given that Anthony Edwards is seen as the future face of the Timberwolves’ franchise. He’ll also be eligible for an extension following the 2022-23 campaign.

The details of a potential Towns extension could also have an impact on what Minnesota decides.

Even with the NBA salary cap set to increase big time moving forward, these finances are questionable to say the least. This is a total of $281 million that would be due to Towns over the next six seasons.

Related: Four moves the Minnesota Timberwolves must make to return to playoffs

Karl-Anthony Towns as a building block for the Wolves

This remains a major point of contention within the Timberwolves’ fan base. Despite helping lead Minnesota to a surprise playoff appearance, Towns struggled big time with consistency in the postseason.

He scored 20 points or less three times in six games, including a 6-of-18 shooting performance in Minnesota’s season-ending Game 6 loss to the Memphis Grizzlies in the first round.

These numbers are down nearly across the board from a regular season in which KAT averaged 24.6 points while shooting 53% from the field.

Towns has made it clear that he wants to remain in Minnesota long-term and help build a championship contender with the Wolves. That was obvious following their first-round playoff exit. He also touched on a potential contract extension.

“I love this city. So obviously things will happen this summer when they happen, they happen,” Towns said about signing a new deal when the season ended. “I’ve been here so long I don’t like making prophecies. I’ll let it come if it comes. If it comes, it comes, then we’ll deal with it when it comes.”

Karl-Anthony Towns on contract situation, via the Star Tribune

At issue here is Connelly now making the decisions in Minnesota. He has no built-in relationship with Towns and the rest of the roster. We’ve also read reports that point guard D’Angelo Russell could be on the trade block.

Whether there’s wholesale changes behind Edwards in Minnesota remains to be seen. What we do know is that Connelly is going to want to put his imprint on the roster.

That could potentially include trading Towns rather than pay him what would be the most-expensive contract in franchise history with a new ownership group set to take over here soon.