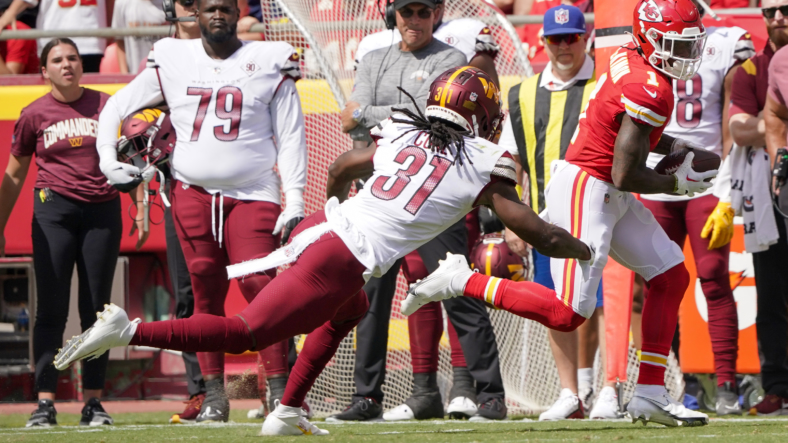 The Washington Commanders keep receiving bad news. After the shocking shooting that led to their potential starting running back Brian Robinson being sidelined indefinitely, now coach Ron Rivera could be down another starter. Safety Kamren Curl recently injured his thumb.

Though the specifics of the injury have not yet been revealed, according to The Athletic’s Ben Standig, it may even require surgery. Yet, it’s possible that the operation has already taken place. Curl was seen with his right arm in a sling during Wednesday’s practice, in which he watched from the sidelines.

As far as Curl’s timeline to return, or if he’ll be ready in Week 1 when the Commanders take on the Jacksonville Jaguars? Coach Rivera wasn’t willing to offer any answers.

Thanks, coach. As far as when the actual injury occurred, it’s anyone’s guess. Curl didn’t take the field during Washington’s preseason finale vs the Baltimore Ravens, but that may have been a precautionary preseason decision to hold him back. The third-year defensive back was seen leaving practice early with a member of the team’s training staff in an Aug. 25 practice session.

Despite being the 216th overall pick in the 2020 NFL Draft, Curl quickly rose to starter status, where he was first on the field in 11 of the 16 games he played during his rookie season. Curl then started 14 more in 2021. The 23-year-old has missed just one game in his NFL career, which came in Week 15 when he had to hit the COVID list. If Curl can’t go in Week 1, the defense will be without their second-leading tackler from a season ago.

While the Commanders may or may not still be holding out hope for Curl’s return, only they know his injury timeline at this point. It leaves us to speculation. If Curl can’t go, who will?

Right now, the presumed starter points to 2021 fifth-round pick Darrick Forrest. The 23-year-old safety played in eight games in 2021 but only played 26 defensive snaps. Now he may be set to be tested on a much bigger scale. Commanders fans shouldn’t be too concerned. Curl was a former seventh-round pick who quickly showed he could handle a larger role. Maybe now Forrest can prove he’s ready to do the same. Though, in an ideal world, the Commanders will have their original starting safety back in the lineup in Week 1.