Justin Fields has made serious strides but it's still a work in progress with these huge mistakes. 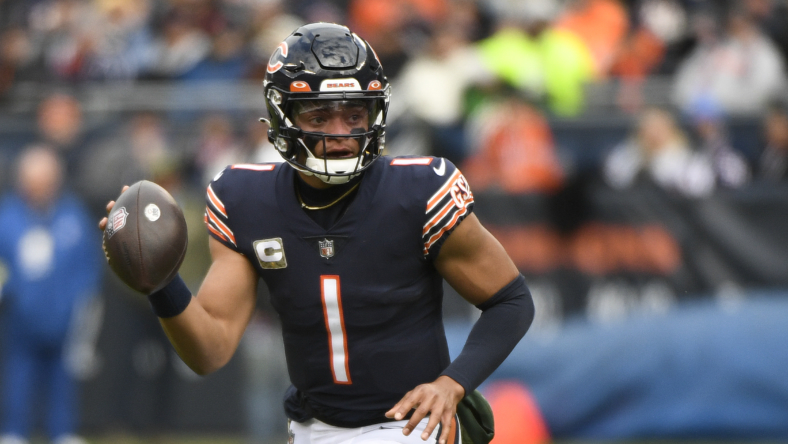 Chicago Bears quarterback Justin Fields has been riding high lately, giving fans of the team a great sense of renewed hope they have not experienced in quite some time.

The second-year quarterback has also become a fantasy stud as of late, making this ill-advised pick-six toss to Lions defensive back Jeff Okudah completely baffling. It is the seventh interception Fields has thrown this season.

This is a great example of Fields’ decision-making when under fire still being a work in progress. There’s no question he should have just thrown the ball away there, dusted himself off, and moved on to the next play.

Justin Fields turns a negative into a positive

The craziest part about expecting Fields to throw the ball away and move on to the next play is just how quickly he did that very thing.

A truly remarkable rebound for the frequently galloping 23-year-old quarterback, this time going for 67 yards and erasing any and all thoughts of that troubling pick-six.

This sequence of going from colossal failure to so quickly — literally and figuratively — finding paydirt feels like the football version of Yankees legend Mariano Rivera serving up a moonshot and then striking out the side.

Just unbelievable but not nearly as stunning as this outstanding quarterback rushing stat when one takes into account all the legendary, freakishly fast quarterbacks who have preceded him.

It’s more than fair to say at this point that Justin Fields, mistakes and all, is very much the real deal.

The Chicago Bears and their fans can finally breathe a much-needed sigh of relief, as they absolutely have their franchise quarterback for the next decade.