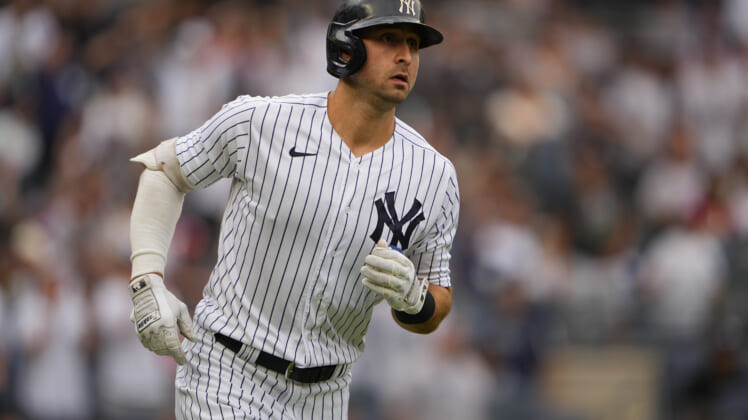 Pat Ragazzo of Sports Illustrated first reported the deal, with Ken Rosenthal of The Athletic reporting the Dodgers and Yankees were in serious talks on the trade.

The deal comes just over a year after the Yankees acquired Gallo. In that July 28 trade with the Texas Rangers, New York traded top-15 prospects Josh Smith and Ezequiel Duran along with top-30 prospects Trevor Hauver and Glen Otto to the Rangers.

Gallo never found his stride in New York. Across 501 plate appearances in a Yankees uniform, the corner outfielder struggled defensively and struck out in 38.7% of his trips to the plate. He owned a .159/.291/.368 slash line during that stretch, with a lowly 88 wRC+ that is far below the 100 league average. Things only worsened this season.

Even before acquiring Andrew Benintendi, New York was ready to move on from its costly mistake. While none of the players the Yankees gave up for Gallo have blossomed in Texas, the 2021 trade will be viewed as a whiff by Brian Cashman.

With that acknowledged, there is some room for optimism with Gallo’s move out of New York and to Los Angeles.

Why Joey Gallo was a buy-low trade target

There’s a reason several MLB teams expressed interest in Gallo. It’s not because anyone expects him to return to form as a two-time All-Star selection (2019, 2021). Instead, he is a serviceable bat with a history of playing quality defense in the corner outfield.

It’s fair to argue the 28-year-old outfielder experienced some of the same issues others have. As we saw with starting pitcher Sonny Gray, some talented players don’t respond well to the added intensity of playing at Yankee Stadium with the New York spotlight on them. It proved to be true for Gallo.

The change of scenery is a good thing for Gallo. There’s also enough in his outlying numbers to believe this is a better hitter than what we’ve seen since July 2021.

Gallo ranks in the 98th percentile for Baseball Savant’s Barrel rate this season, a sign that he is still able to firmly square up baseballs when he makes contact. The raw power is also still a part of his game, ranking in the 90th percentile for Hard Hit rate and boasting a 113.0 mph max exit velocity this season.

There are some issues worth mentioning. Gallo’s 26.6% swing rate on pitches outside the zone (FanGraphs) is the second-worst mark in his career. He also is dreadfully low on Whiff rate (40.9%), highlighting his woes at making contact.

In terms of Gallo’s defense, he ranks in the 47th percentile for Sprint Speed and in the 12th percentile for Outs Above Average. He can’t cover as much range as he used to and whether or not that’s tied to some of his issues at the plate, declining athleticism or another cause, it’s worth another team trying to fix.

Gallo is a strong addition to the Dodgers’ outfield depth, providing the World Series with great left-handed power off the bench.